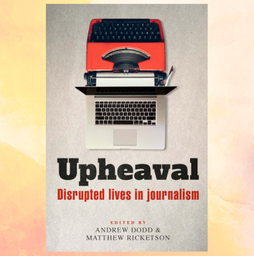 Come along to an event to launch and discuss Upheaval: Disrupted Lives in Journalism.

Journalist and legal commentator, Richard Ackland, will launch the book. After completing a law degree Richard Ackland began his career in the media in the 1970s with The Australian Financial Review before moving to the ABC where he hosted radio programs as well as ABC television’s Media Watch. Along with Deborah Richards and Anne Connolly, he exposed the cash for comment scandal on Media Watch, winning a Gold Walkley award. Since the 1980s he has been the publisher of Justinian and the Gazette of Law and Journalism. He has been a columnist on legal issues for The Age and more recently The Saturday Paper and Guardian Australia.

Academic and journalist, Matthew Ricketson will join a discussion featuring Amanda Meade of Guardian Australia, one of the many journalists interviewed for Upheaval and Dr Penny O’Donnell, a member of the New Beats project team. Andrew Dodd, one of the book’s co-editors, will be MC.

Matthew has run journalism programs at three universities and since 2017 has headed the Communications area at Deakin University. He has worked on staff at The Age, The Australian and Time Australia magazine. He is the author of three books and editor of three more. He is the co-author, with Patrick Mullins, of Who Needs the ABC? Why taking it for granted is no longer an option, to be published in April 2022 by Scribe.

This event is supported by the Walkley Foundation, Media Entertainment & Arts Alliance, Deakin University, NewSouth Publishing, the University of Melbourne and the Judith Neilson Institute.