On May 24, 2020, Rio Tinto destroyed a 46,000-year-old rock shelter that was sacred to the Puutu Kunti Kurrama and Pinikura people, against their express wishes. Calla Wahlquist’s first story on the explosion reached a global audience. The destruction of the Juukan Gorge rock shelters became an international scandal, and Guardian Australia drove coverage of the issue both in Australia and in London, where Rio Tinto’s chairman and key investors were located.

Walhquist and Indigenous affairs editor Lorena Allam went on to break the news that BHP had applied to destroy at least 40 registered Aboriginal sites. That application was approved three days after Juukan Gorge was destroyed. Within eight hours of publication, BHP had backed down. The story was the subject of a shareholder resolution at BHP’s annual general meeting in August, in which the company pledged not to destroy the sites without further “deep consultation” with the Banjima people.

Read our interview with Calla Wahlquist and Lorena Allam here.

Lorena Allam is a Gamilaraay and Yuwalaraay woman whose country lies in the Dhariwaa or Narran Lakes area of far west NSW and spans the border with south-west Queensland. Allam has been a journalist and broadcaster for 30 years, working for ABC News, Triple j, Radio National, ABC TV and online. Allam is the Indigenous affairs editor for Guardian Australia. 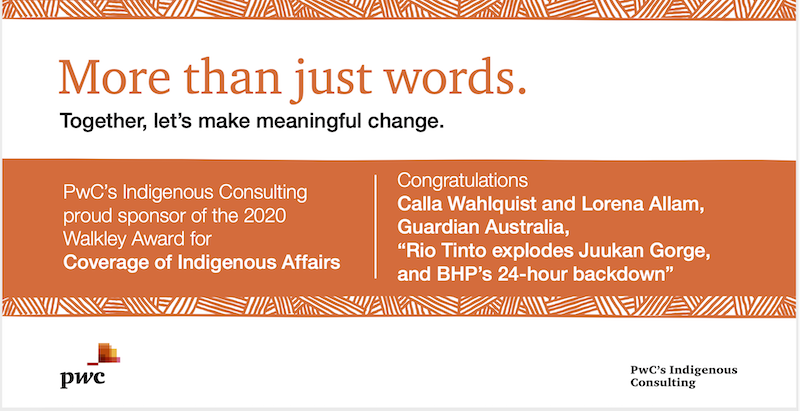