Chip Le Grand reported on the Essendon drugs scandal for The Australian for almost two years, and found many of the insiders of this complex, contested story willing to speak to him. Le Grand decided to write a comprehensive telling of the saga that had polarised public opinion in Australian sport. The research was epic – gathering court transcripts, witness testimony, texts, emails and confidential reports from anti-doping authorities.

And then the challenge of the writing – layering a multitude of narratives and documented evidence in a fashion that drew in readers, challenging their preconceptions and fatigue on a well-covered topic.

Chip Le Grand has been a staff reporter with The Australian newspaper for more than 20 years. He writes principally about sport, politics and crime. His coverage of the Essendon drugs scandal, a saga that kept a generation of sports reporters in work through difficult times, won two Melbourne Press Club awards and an Australian Sports Commission award. 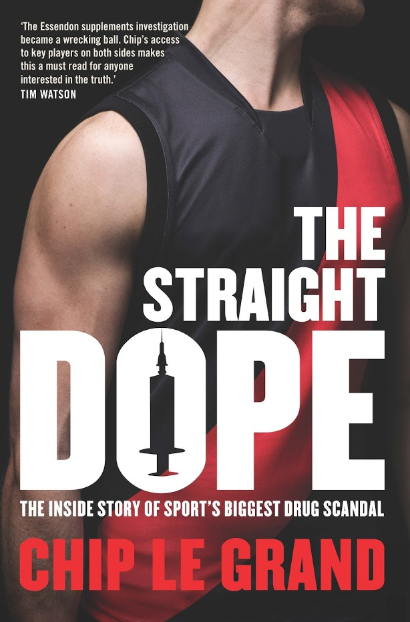 The Straight Dope brings together the story of the AFL/NRL supplements saga in a way that is dramatic, insightful and often surprising. Through interviewing central players and sifting the needles from a haystack of documentary evidence, Le Grand has used the book form to convert the first draft of daily journalism into a compelling and coherent narrative.