“Cardinal: The Rise and Fall of George Pell”

“Cardinal: The Rise and Fall of George Pell”

Louise Milligan’s book examines Australia’s most senior Catholic through the lens of the child abuse saga which has dogged the Catholic Church. She tells how George Pell rose from Ballarat boy to Oxford, and through the ranks to become the Vatican’s indispensable “treasurer”. The Royal Commission into Institutional Responses to Child Abuse has revealed horrific stories about sexual abuse of the most vulnerable, and provoked public anger at the extent of the cover-up. Pell has always portrayed himself as the first man in the Church to tackle the problem. But questions about what the Cardinal knew, and when, have persisted. The nation’s most prominent Catholic is now the subject of a police investigation into allegations spanning decades that he, too, abused children.

Milligan has followed the story doggedly, piecing together the story with sensitivity and care from thousands of pages of historical documents and interviews with hundreds of people. The book has had an enormous impact – reprinted within two weeks of publication and inspiring dozens of letters from supportive readers to Milligan.

Milligan is an investigative journalist for ABC TV’s 7.30 and Four Corners programs and an author. She was awarded the Melbourne Press Club’s Gold Quill Award this year, the highest prize in Victorian journalism, for her work on the Royal Commission into Institutional Responses to Child Abuse and Cardinal George Pell. Her best-selling book, Cardinal: The Rise and Fall of George Pell, was published in May. Her work has been nominated for Walkleys the past three years. She is passionate about issues including institutional child abuse and cover-up, mental health and injustice. 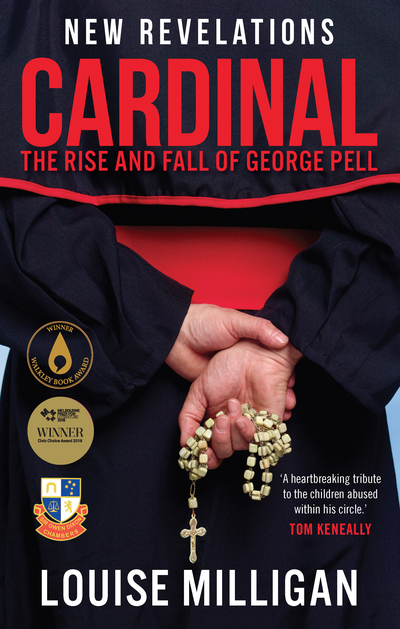 “Louise Milligan’s brave book tackles an extremely difficult and sensitive subject where the stakes are high and vested interests powerful and influential. Cardinal is distinguished by the author’s dogged investigative powers, by the careful piecing together and cross-referencing of events and victims’ stories to impressive effect. The subject matter is a defining topic of the moment.”