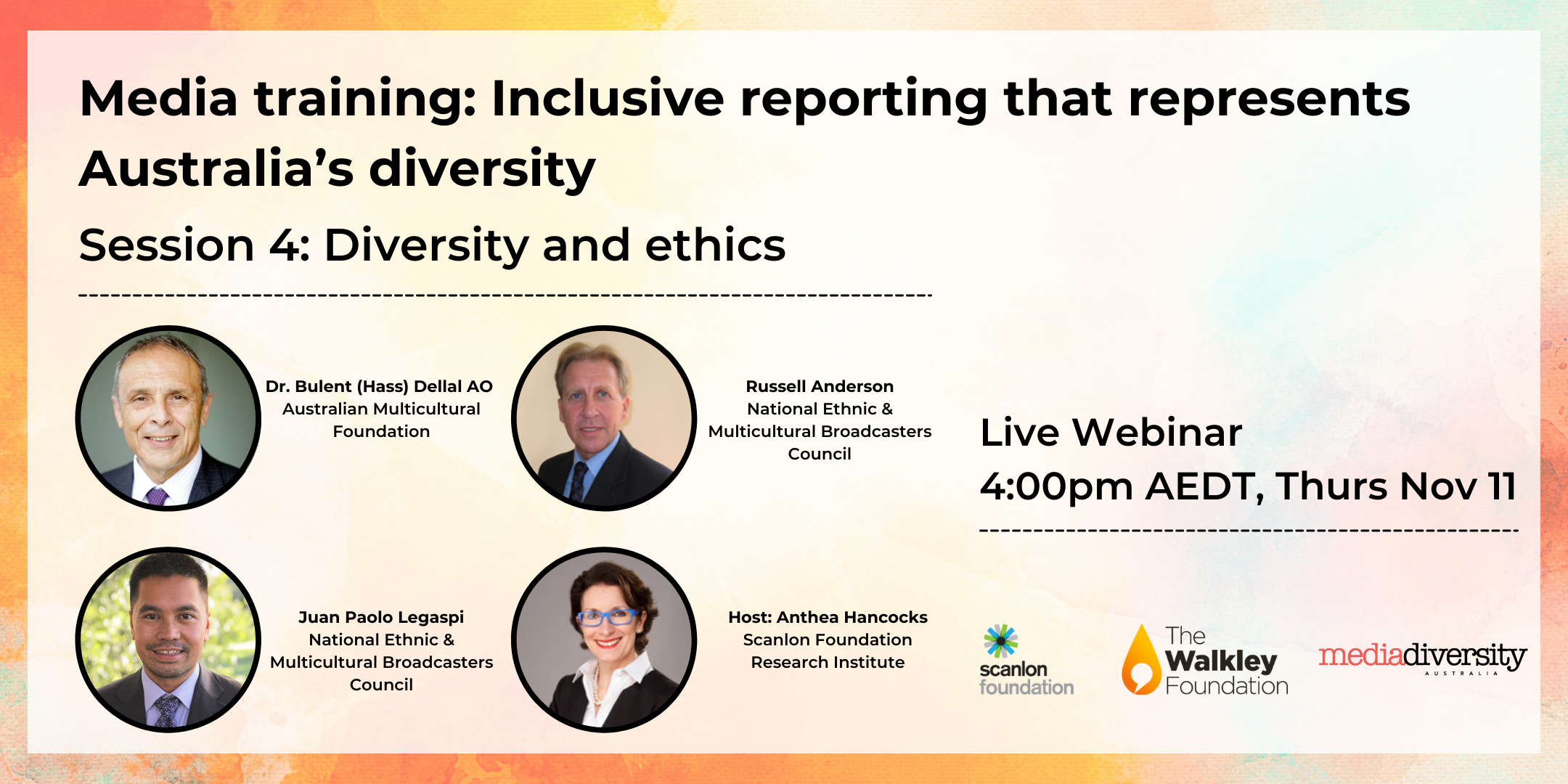 This is the fourth and final session in a series of professional development webinars for Australian journalists to bring greater diversity and inclusion to their reporting, presented by the Walkley Foundation and the Scanlon Foundation. #4 focuses on diversity and ethics, with a conversation between Dr Hass Dellal AO, Russell Anderson and Juan Paolo Legaspi.

Over the past decades, Australia’s diversity has increased considerably as has Australia’s pride in being a multicultural society. Similarly, over this time, our understanding of how to welcome diversity has progressed. We now have over 270 ethnic groups living in Australia, consequently our diversity is a strength to embrace and integrate into our thinking. With all the best will in the world, this integration creates ethical challenges. Whether this relates to the words that we use to describe cohorts of people, an understanding of cultural appropriation, representations through images or music or the risks of gross generalisations, we can’t afford to take decades to get this right.

Hass Dellal has worked with multiple Federal and State governments throughout this time and has watched Australia’s progress in representation. Russell Anderson is the CEO at the National Ethnic and Multicultural Broadcaster’s Council (NEMBC), advocating for multiculturalism and media diversity. Juan Paolo Legaspi is Vice President of the National Ethnic and Multicultural Broadcasters’ Council (NEMBC). He works with community groups, government and non-government organisations to promote multiculturalism in the Australian media landscape. Join them for a discussion about the role of the media, ethics and diversity moderated by CEO of the Scanlon Foundation, Anthea Hancocks.

Dr Bulent (Hass) Dellal AO is the Executive Director of the Australian Multicultural Foundation and the former Chair of SBS (Special Broadcasting Service). He has over 30 years of experience in multicultural affairs and serves on a number of committees and boards which include: Former Chair, the Centre for Multicultural Youth, Former Chair, currently Emeritus Patron of the Islamic Museum of Australia, Co-Chair of the Victoria Police Multi-faith Council, Deputy chair of the Australian Multicultural Council, Commonwealth of Australia, Board Member of Council for Australian-Arab Relations, board member of Pennington Institute, Member, Expert Advisory Committee on Countering Violent Extremism, Dept. of Justice and Community Safety, Vic. Govt., Australian Government, a consortium member of Centre for Resilient and Inclusive Societies (CRIS), a member of the South East Asian Network of Civil Society Organizations (SEAN-CO) and Chair of Alfred Deakin Institute (ADI)’s Advisory Board, InTouch Men’s Advisory Committee Member, a Fellow of the Williamson Leadership Program, an Australia Day Ambassador and served as a Special Adviser to the Australasian Police Multicultural Advisory Bureau by the Conference of Commissioners of Police, Australasia, and the South West Pacific Region. Internationally, he co-founded and established the European Multicultural Foundation. He also introduced the biannual Diversity Matters Conferences for Commonwealth nations and has promoted the Australian multicultural experience internationally on many occasions. He has also organised and co-hosted numerous conferences including: the National Muslim Youth Summits, the National Conference of Imams on behalf of the Commonwealth Government which informed the National Action Plan, the 2007 Metropolis Conference with Monash University and the 2018 Metropolis Conference with Multicultural NSW and Settlement Services International. He was awarded the Medal of the Order of Australia in the General Division for services to Multicultural Organisations, the Arts, and the Community on the Queen’s Birthday Honours List 1997 and awarded the Centenary of Federation Medal in 2003. He was conferred with an Honorary Doctorate in Social Sciences by RMIT University on the 13 December 2006. In 2015, he was appointed an Officer of the Order of Australia for distinguished service to the multicultural community through leadership and advisory roles, to the advancement of inclusiveness and social harmony, to youth, and to the broadcast media.

Russell Anderson is the CEO at the National Ethnic and Multicultural Broadcaster’s Council (NEMBC). He has 30 years’ experience in journalism, media production and management. He has worked with the United Nations, for international and national NGOs on media projects and was a senior media advisor for East Timor’s national broadcaster.

Juan Paolo Legaspi is the Vice President of the National Ethnic and Multicultural Broadcasters’ Council (NEMBC). He works with community groups, government and non-government organisations to promote multiculturalism in the Australian media landscape. Originally born in Manila, Philippines, Juan Paolo has been a broadcaster for the local Filipino community in South Australia since 2008 via local multicultural community radio station, 5EBI. He was drawn to the opportunity to volunteer as a radio broadcaster to reconnect with his Filipino heritage and culture. Juan Paolo was appointed Chair of 5EBI in 2017. Since then, he became a member of the NEMBC National Executive and from 2019 serves as Vice President. Having a passion for public policy and economics, Juan Paolo has an extensive history in community advocacy, policy development, strategic planning and communications both within the government and non-government sectors.