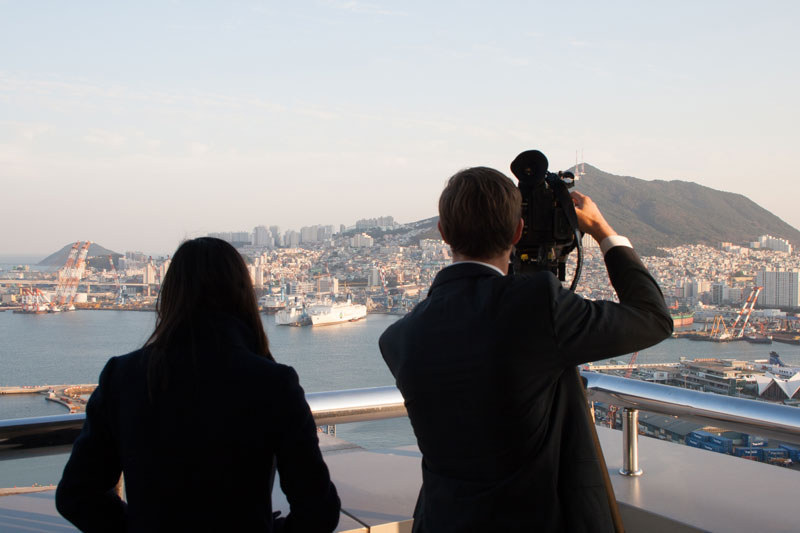 Keeping up with the Kims

A journalism exchange took Michael Janda, Alexandra Lee and Jason Whittaker to South Korea, where they found a country riding an economic and cultural wave while looking nervously north towards its perpetual enemy.

We’re picked up at Incheon International Airport by a tour guide, who goes by the English name of Christina.

As she shepherds three jet-lagged Australian journalists into a bus, her 10-year-old son is spending another night studying at one of South Korea’s many hagwons, or cram schools.

Each night it’s something different: maths, English, piano, tae kwon do. Christina is worried her son’s maths is only at a year 5 level when the girl next door is two years ahead. But he’d rather sit around playing games on his iPhone. “Sometimes,” Christina says with a tired smile, “I think I hate Steve Jobs.”

In four decades, South Korea has gone from having a GDP equivalent to a poor African country in the 1960s to being the 15th largest economy in the world. It is home to companies such as Hyundai, LG, Samsung and Kia. It boasts a 93 per cent high school completion rate, a 98 per cent literacy level and a 3 per cent unemployment rate.

People here speak proudly of hallyu, the Korean wave, as the country exports its cultural products overseas. Korean films win acclaim at international festivals and sickly sweet K-Pop groups sell out stadiums across the world. But with an incredible 1.8 billion views on YouTube for “Gangnam Style”, the singer PSY is the poster boy for the hallyu movement. South Koreans only have to look up at the glassy blue skyscrapers in the Gangnam district to find evidence of how hard work, study and education pay off, no matter where you come from.

Three former presidents came from poor farming families. In one week we visit a museum, a policy think tank and a concert hall all dedicated to Chung Ju-yung, the rice delivery boy who became the founder of the massive Hyundai conglomerate.

The rapid growth, the hyper-competition, has come at a cost. South Korea has the highest suicide rate in the OECD. The pressure to succeed takes its toll.

But it’s the area an hour’s drive outside of Seoul that is the focus for most of the international media. The demilitarised zone between North and South Korea is a tourist trap, but the war – in effect, still being waged – is deeply ingrained in the psyche of Koreans.

We wandered across the invisible line (marked by a desk) inside a low-slung hall in the military border village of Panmunjom. When South Korean groups visit this hall, their troops guard it and the northern door is locked. When North Korean tours visit, it’s vice versa.

Outside, we joined a group of cameramen and photographers taking long-range pictures of a solitary North Korean guard on the steps of their main building at the site. The lone figure played a game of peek-a-boo, hiding behind a pillar and occasionally slipping out to stare at us through binoculars. The farce is completed with a visit to the Joint Security Area visitor centre and, naturally, its gift shop. It’s a comedy and an ever-present potential tragedy. North Korea’s Kim Jong-un has already used ballistic missile and nuclear tests to stamp authority on his two-year-old reign.

South Korean officials say the North may be as little as three years away from a weaponised nuclear device. The same officials openly admit the South has considered, and is still pondering, military options to neutralise the nuclear threat.

The pro-nuclear case has been strengthened by a perceived shift in the United States’ focus away from Asia towards events in the Middle East and its own domestic problems. Many South Koreans feel it’s again leaving them exposed on a small peninsula between a powerful and rising China, an increasingly nationalistic Japan, a resurgent Russia and their unpredictable neighbour to the north.

There is long-standing gratitude for Australia and its part in repelling northern forces in the Korean War in the 1950s. Still, officials from both nations talk of moving the relationship beyond the history and conflict. They talk about the need for a “new narrative” based on economic ties.

South Korea is Australia’s fourth-largest trading partner, with two-way trade worth almost $32 billion in 2012. The Abbott government has made signing a free trade agreement (FTA) a priority.

Australia’s beef industry and resources sector, particularly liquefied natural gas, are expected to be the biggest winners under an FTA. For Korea, car and petroleum exports, which account for more than 51 per cent of Korea’s total exports to Australia, will get the biggest boost. And a greater exchange in professional services, where productivity in South Korea is low, is a big target.

There is one sector of the South Korean economy that is doing remarkably well: news media.

The industry has experienced the same circulation declines and uneasy digital shift as the rest of the world, but among the staggering 190-odd national newspapers, dozens of public and private broadcasters and almost 3000 registered online publications, profitability is holding up. Korean publishers have even managed to extract money from local search engines to syndicate content (Google barely has a foothold here; local players dominate the market).

Among Korea’s many lessons for us as Australian journalists, this was perhaps the most eye-opening lesson of all.

Michael Janda is a business reporter at the ABC, Alexandra Lee is a producer for ABC News 24 and Jason Whittaker is editor of Crikey.