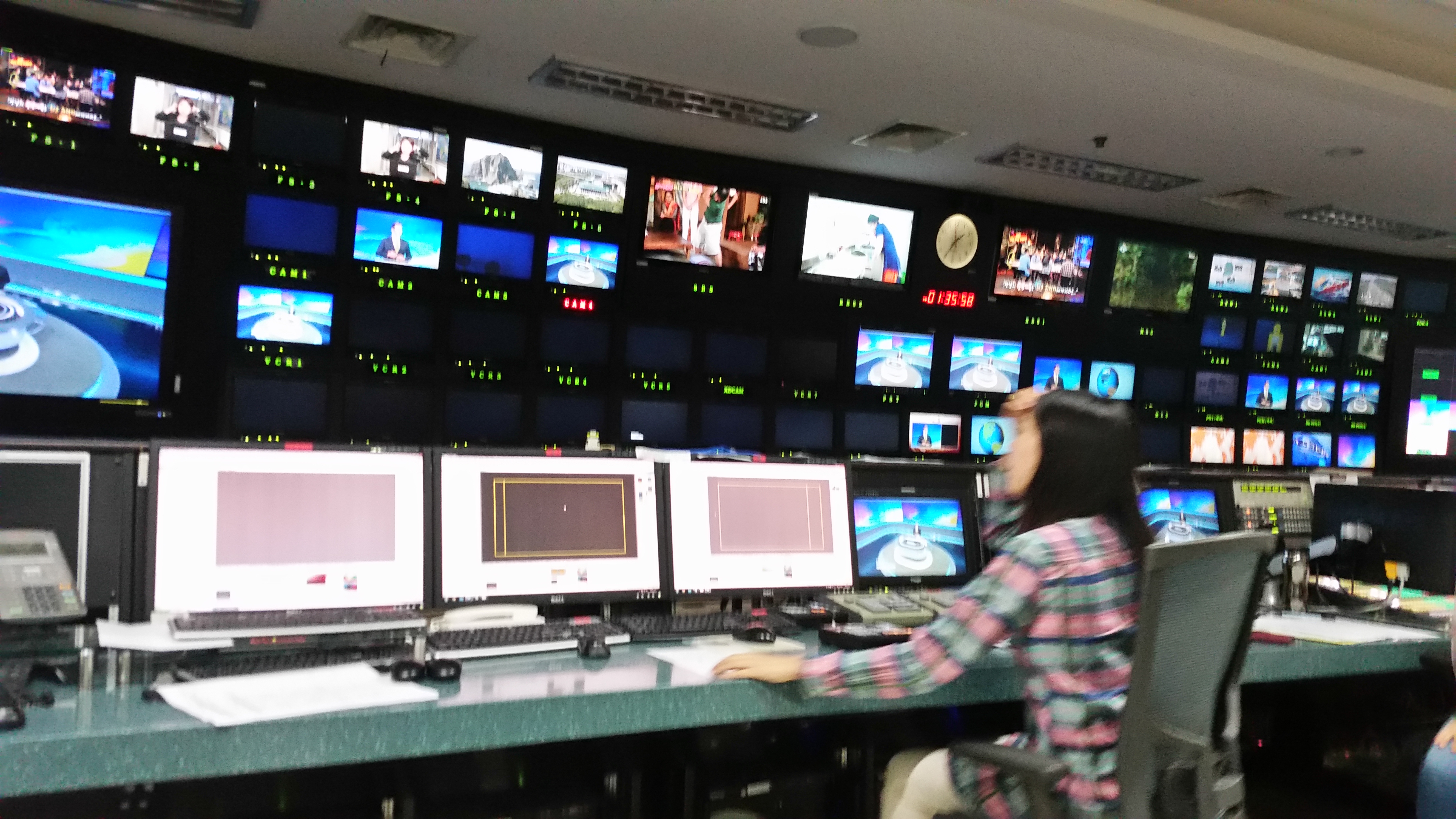 Three Australian journalists were in Seoul last week for an Australia-Korea Journalist Exchange. Walkleys program manager Clare Fletcher accompanied them, and sent us some snapshots of the media scene there.

Our hosts at the Korea Press Foundation briefed us yesterday on the industry. Youngju Kim presented her research to give us an overview of Korea’s news media in 2015, painting a rather gloomy picture in line with the global trends. Korea has seen a rapid rise of mobile and social media along with rapid decline in the newspaper industry. Twitter is on a slight downward trend, but Facebook is growing among Korean users. Even more than social, portal sites like Naver and Daum are the main gateways for Koreans to find news stories — and the news organisations’ relationships with the portal sites are at once partnerships and adversarial.

“Mobile first” is a concept the media organisations we visited are quick to agree they’re working on, but in reality both print and broadcast outlets break stories in their traditional formats before they do online. Competition is fierce, and editors fear their stories will be taken by other outlets if they lead with breaking stories online.

Paywalls have proved unsuccessful for Korean print outlets, whose own online presences have been undercut by the massive popularity of portal sites. These sites, including Naver, aggregate news amongst other content, including music, web cartoons and social communities. Mobile-driven Koreans consume news stories right on the portal sites rather than clicking through to media organisations’ home sites, creating tension with news creators.

National daily Dong-A Ilbo is one of Korea’s oldest newspapers, established on April 1, 1920. The paper’s circulation peaked in 1997 but has been dropping ever since as Koreans embrace online and mobile news. The company diversified three years ago with a foray into television, Channel A, and now the organisation employs 350 journalists with 120 more at Channel A.

Dong-A Ilbo has a proud tradition of advocacy against dictatorships and for democracy, while initiatives like its Young Dream Center actively assist young people to prepare for the forbidding job market. Sue Ahn, deputy manager of the Job Creation Team at Young Dream Center said the newspaper sees it as its duty to act on their power to do good for the country. With youth unemployment at around 10.2 percent, the program provides mentoring and industry links for young people, and supports startups and campaigns to improve conditions for part time workers. 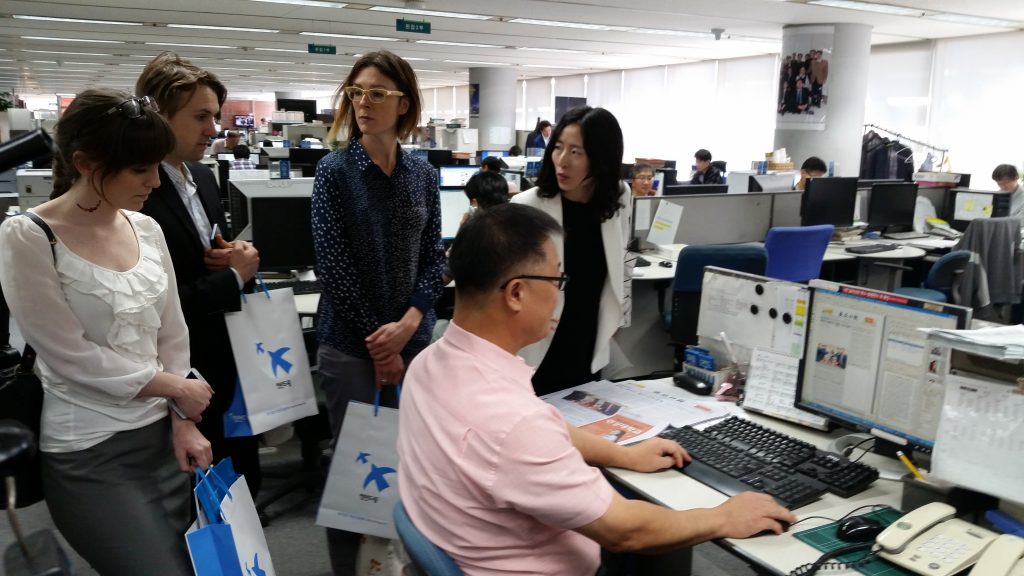 An editor at Dong-A Ilbo mocks up a page layout. Photo: Clare Fletcher, The Walkley Foundation

The newspaper itself hires about 10 new people each year, with candidates sitting for competitive entrance exams. Rookie reporters start out with six months on the social affairs round, which turns them from sweet, eager students into “warriors”. Within the newsroom there’s a strong hierarchy, and it’s uncommon for reporters to move between organisations — newsrooms prefer to recruit young people and train them rather than seeking out experienced journalists.

KBS, the Korean public broadcaster, has around 5000 staff and produces news for television, radio and online. Executive director of KBS’ digital news division, Jae-Sook Lee, said while they’re working towards digital-first, that approach doesn’t work for all stories. While older audiences are still predominantly tuning in on television, younger audiences are consuming news almost exclusively on their mobiles, leaving the digital team “chasing after two rabbits at the same time”.

The analytics and social media stats show that audiences prefer reading and sharing stories with a human, emotional or funny angle. While Lee said it can be disheartening that people don’t respond as well to serious pieces, the lesson is to present those more serious stories with the formats they know to be popular, including interactives, quizzes and lists. “Many of Korea’s media companies are benchmarking BuzzFeed”, she said.

Five members of KBS’ digital team work on interactive features, and the stats show that audiences stay on site longer to read and consume these pieces. Data journalism too is popular and well-received, but very time-consuming to create a piece of content. With resources tight, the challenge will be to recruit and encourage reporters who can be creative and innovative in their journalism.

Our last visit of the day was Naver, a portal site and company on the lips of many media organisations as both a threat to their business model and the omnipresent site for reaching Koreans. “The Google of Korea”, Naver is a search portal that started in 1999 when other search sites weren’t providing Korean data. More recently Naver has expanded its ambitions globally and moved into developing apps like Line, a messenger service similar to WhatsApp now popular in many countries, particularly Japan. 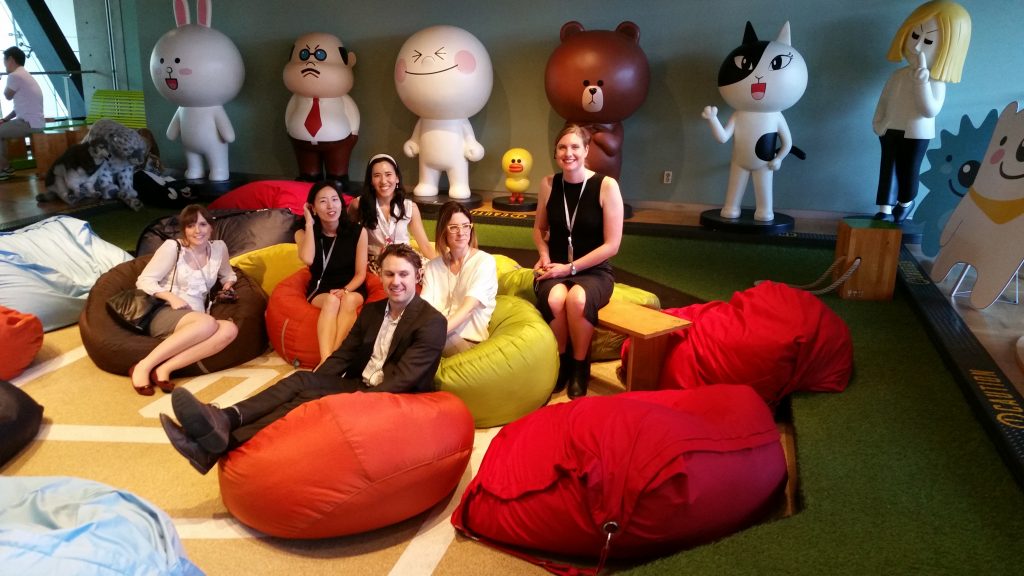 A PR rep at Naver said the company is, of course, aware of the tension with news organisations. “They face a similar challenge to us. We were able to establish our business because of the credibility of the news organisations and their stories. We’re trying to find ways to improve and work together with news sites.”

Three thousand people work in Naver’s building. Set out in the suburbs in something akin to Seoul’s Silicon Valley, the sustainably designed building is outfitted with everything its employees could need, including a health centre, rest stations, showers, a post office, travel agents and a connect space where locals can see performances and staff can hold weddings. Like any self-respecting tech startup there are chill-out spaces for staff with Lego, beanbags, outdoor picnic tables and everywhere the cute bears and rabbits that are Naver’s mascots. The lower floors are also open to the public with a cafe and libraries of magazines and design books — all of which are accessible and employ disabled people and elderly “silver ladies”.