“The Royal formerly known as Prince”, “Bridget over troubled rorters”,

“You had one JobKeeper”

“The Royal formerly known as Prince”

“You had one JobKeeper”

You know you have a good headline when the UK press picks it up and showcases it as the best in the world. And you know it must be really good when it does that with a story on the Royals – and not just any Royals story, but the story of Prince Harry stepping down from his royal role. “The Royal formerly known as Prince” captured the moment while capturing the essentially showbiz flavour of both the British Royal Family and Harry and Meghan’s new life. With “Bridget over trouble rorters”, De Ceglie tweaked a famous pop song to sum up the final stage of the Sports Rorts scandal. In “You had one JobKeeper”, he put a simple twist on a phrase that is part of the Aussie vernacular, so creating the ultimate criticism of a government bungle.

Anthony De Ceglie is the editor-in-chief of West Australian Newspapers. He has been in the role for nearly two years and is responsible for The West Australian, The Sunday Times, PerthNow and the company’s 19 regional and 12 community newspapers. Before editing The West, he was the deputy editor of The Daily Telegraph in Sydney. His first job was at a small regional paper, The Collie Mail, in rural WA. He has won two Walkleys and been a finalist on two other occasions.

“Anthony De Ceglie’s body of work showed his ability to grab attention and capture the story in one perfect headline. ‘You had one JobKeeper’ was one of the best of the year, knitting together readers’ astonishment at the government’s $60 billion JobKeeper mistake, while ‘The Royal formerly known as Prince’ was picked up around the world.“ 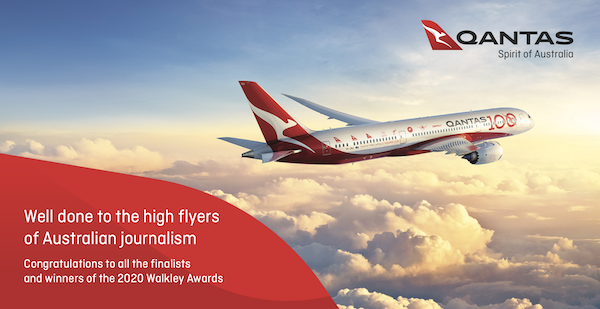