'Dirty Dyson’: A Harasser on the High Court

“‘Dirty Dyson’: A Harasser on the High Court”

The Sydney Morning Herald and The Age

Putting pen to paper for an explosive report that tears at the reputation of an Australian legal titan requires courage and meticulous research, especially when the target is eminent judicial figure and former High Court judge Dyson Heydon.

Jacqueline Maley and Kate McClymont spent two years investigating claims that the former High Court judge had sexually harassed a number of young female associates during his tenure. They conducted more than 100 interviews to reveal the truth about the dark side of one of Australia’s pre-eminent jurists and the institutions that enabled his conduct.

Read our interview with Jacqueline Maley and Kate McClymont here.

Kate McClymont is an investigative journalist with The Sydney Morning Herald. She has won seven Walkleys, including the Gold Walkley for her coverage of the Bulldogs salary cap rorts. She has received numerous other honours, including six Kennedy Awards. McClymont was inducted into the Australian Media Hall of Fame in 2017.

“For two years, Jacqueline Maley and Kate McClymont investigated claims that former High Court judge Dyson Heydon had sexually harassed six young female associates during his tenure. Their three-part presentation left no stone unturned in its masterly prosecution of the facts, which unmasked a man who abused the power of his position and grossly affected the lives of others. This is journalism at its finest.” 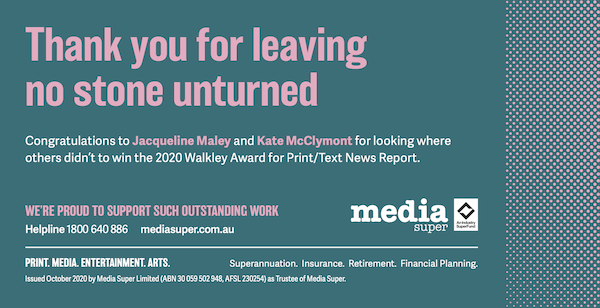