Nick Moir’s series “Firestorm” is a standout photographic essay on the devastation that swept through south-east Australia over the summer of 2019-2020, with every shot a hero image.

Nick Moir said: “I have been studying the meteorology of fire weather and its behaviour for 20 years and this knowledge allowed me to target the day, time, fire and community that would be threatened. On the fire days, I watched the Bureau of Meteorology radar for the intense smoke plumes a strong fire would make to confirm my positioning.

“Throughout the season, I was able to capture images of events and moments that nobody else had. In particular, the events of the ‘area ignition’ in Orangeville on December 5, 2019, where I captured a fire tornado and millions of embers, something that has rarely been photographed before.”

Nick Moir, chief photographer at The Sydney Morning Herald, has specialised in environmental and meteorological events such as storms and bushfires for 20 years, covering major events such as the 2001 Black Christmas, the 2003 Canberra fires, the 2004 Asian Tsunami and the 2009 Black Saturday, as well as each storm season and several USA tornado seasons. Day to day he covers news in Sydney for the SMH, where he has worked since 1993.

“This was a masterly series, displaying the full range of Nick Moir’s impressive technical skill and 20 years’ experience. Every image is breath-taking, capturing the Armageddon-like atmosphere of the firegrounds.” 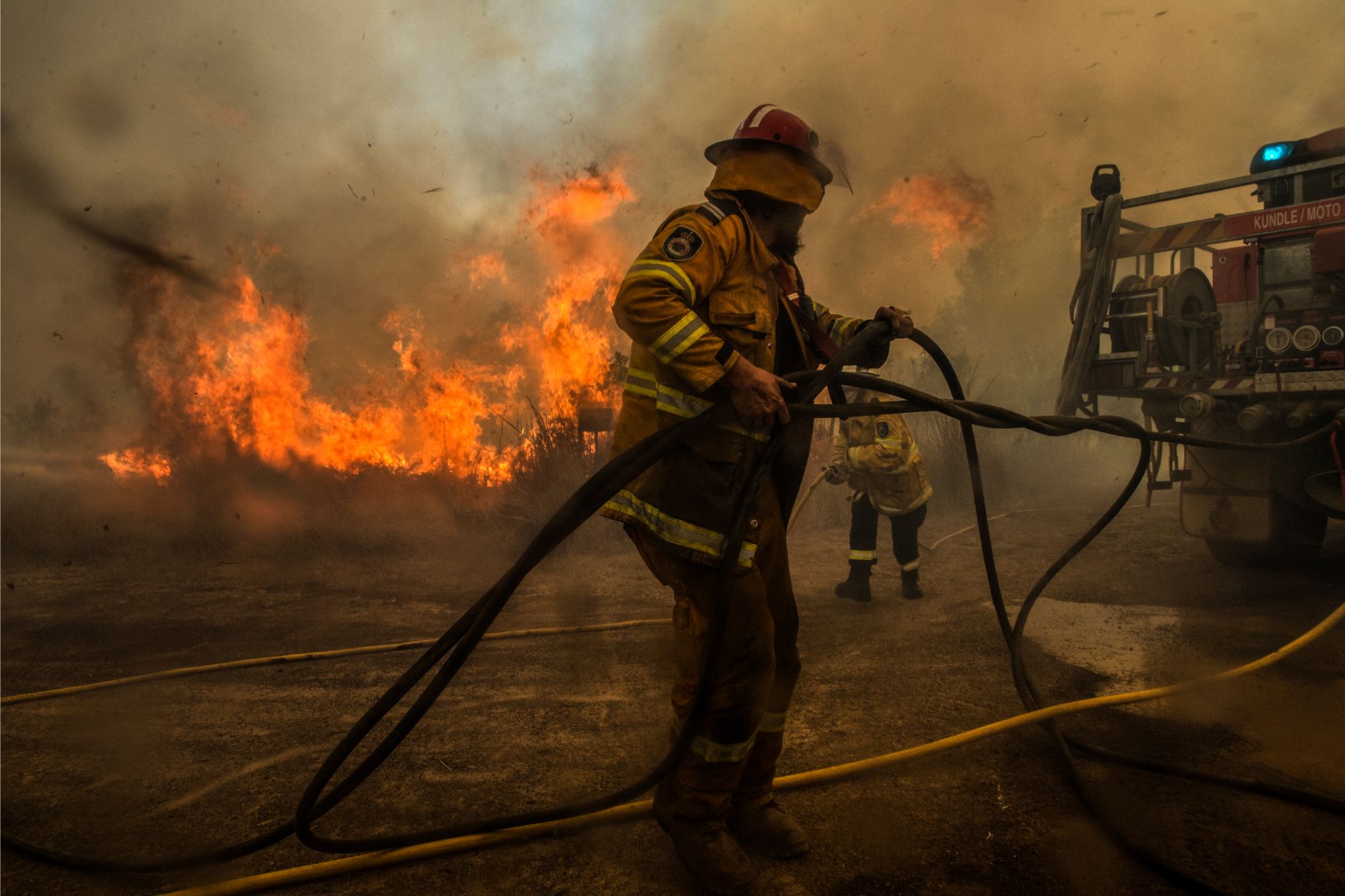 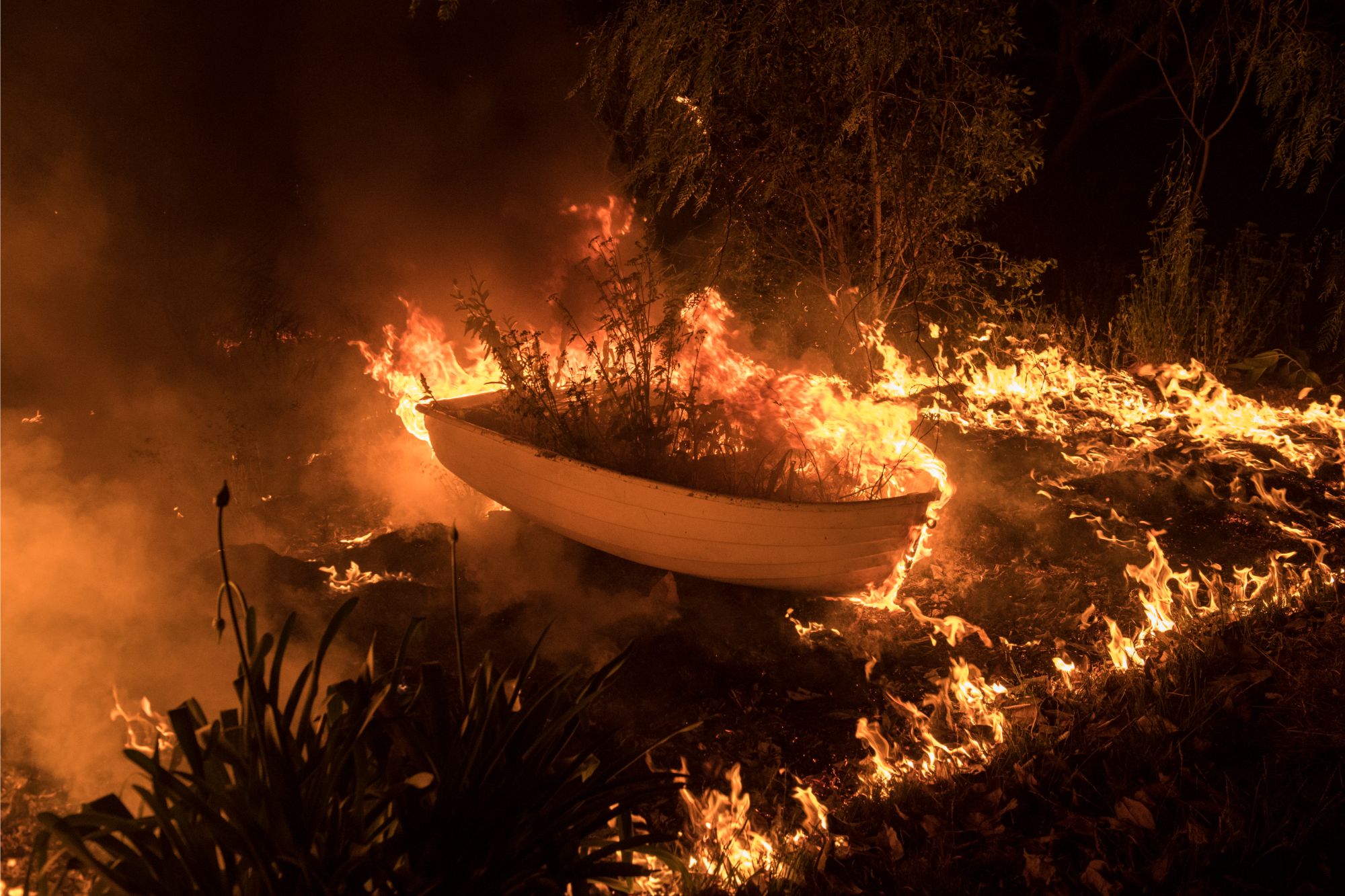 A rowboat being used as a garden bed burns in Failford on the mid-north coast of New South Wales during the Hillville fire. 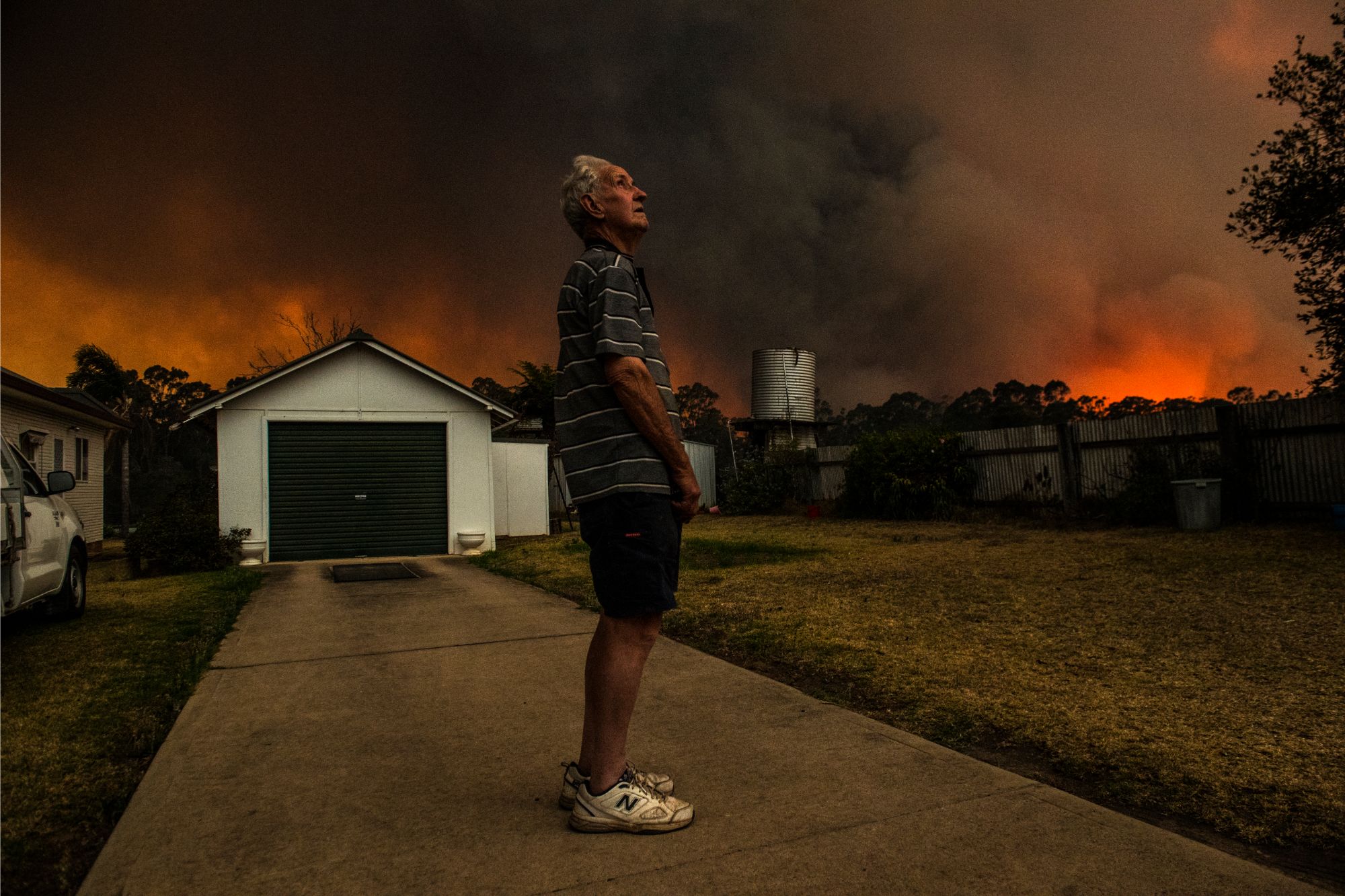 Geoff Gardiner watches the ominous spread of the Green Wattle Creek fire as it pushes into Orangeville in Sydney’s far south-west. 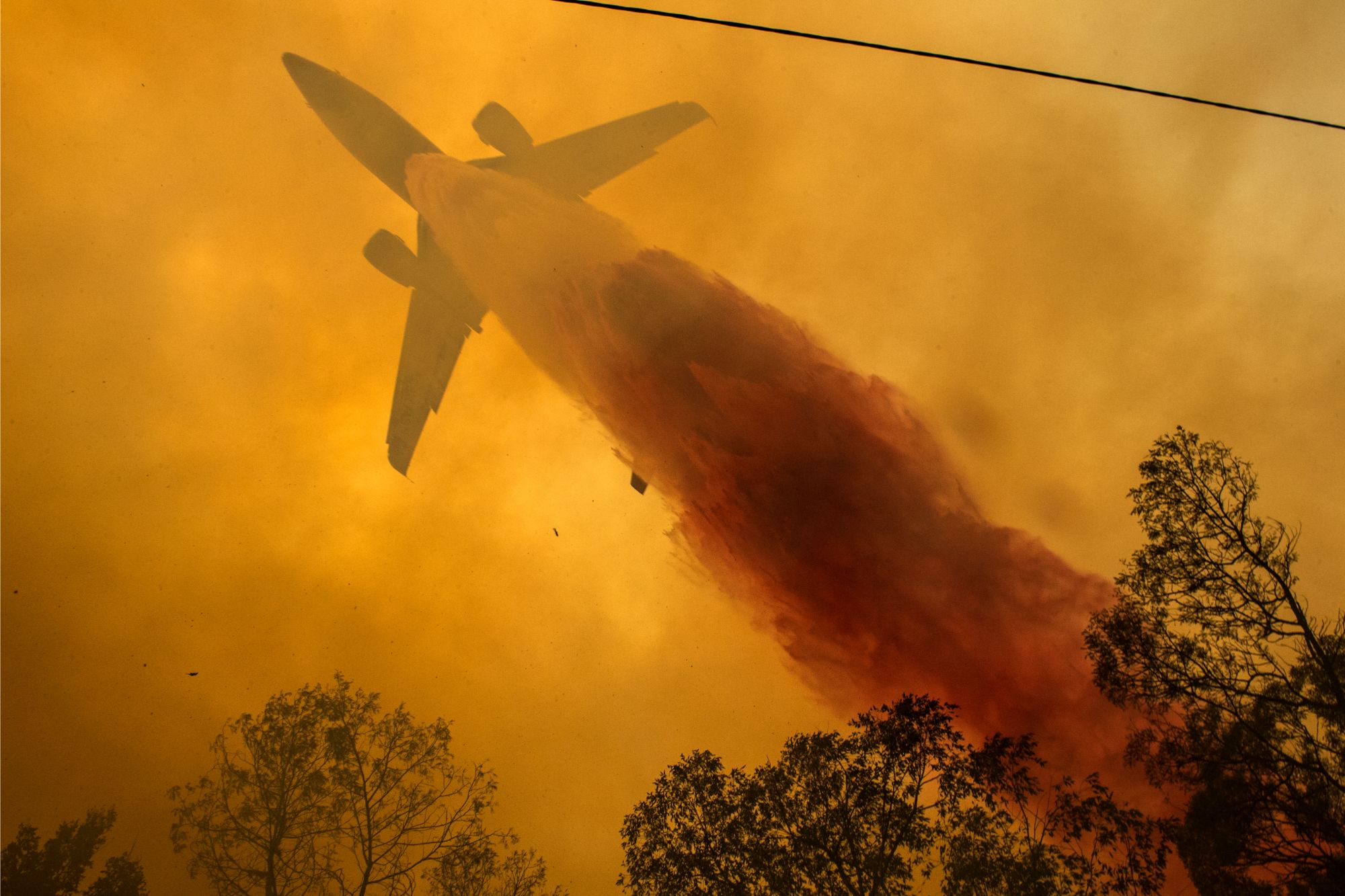 The Rural Fire Service VLAT (Very Large Air Tanker) dumps a load of pink fire retardant over homes in Werombi. The Green Wattle Creek fire had jumped Lake Burragorang the day before and pushed into the far south-west suburbs of Sydney. 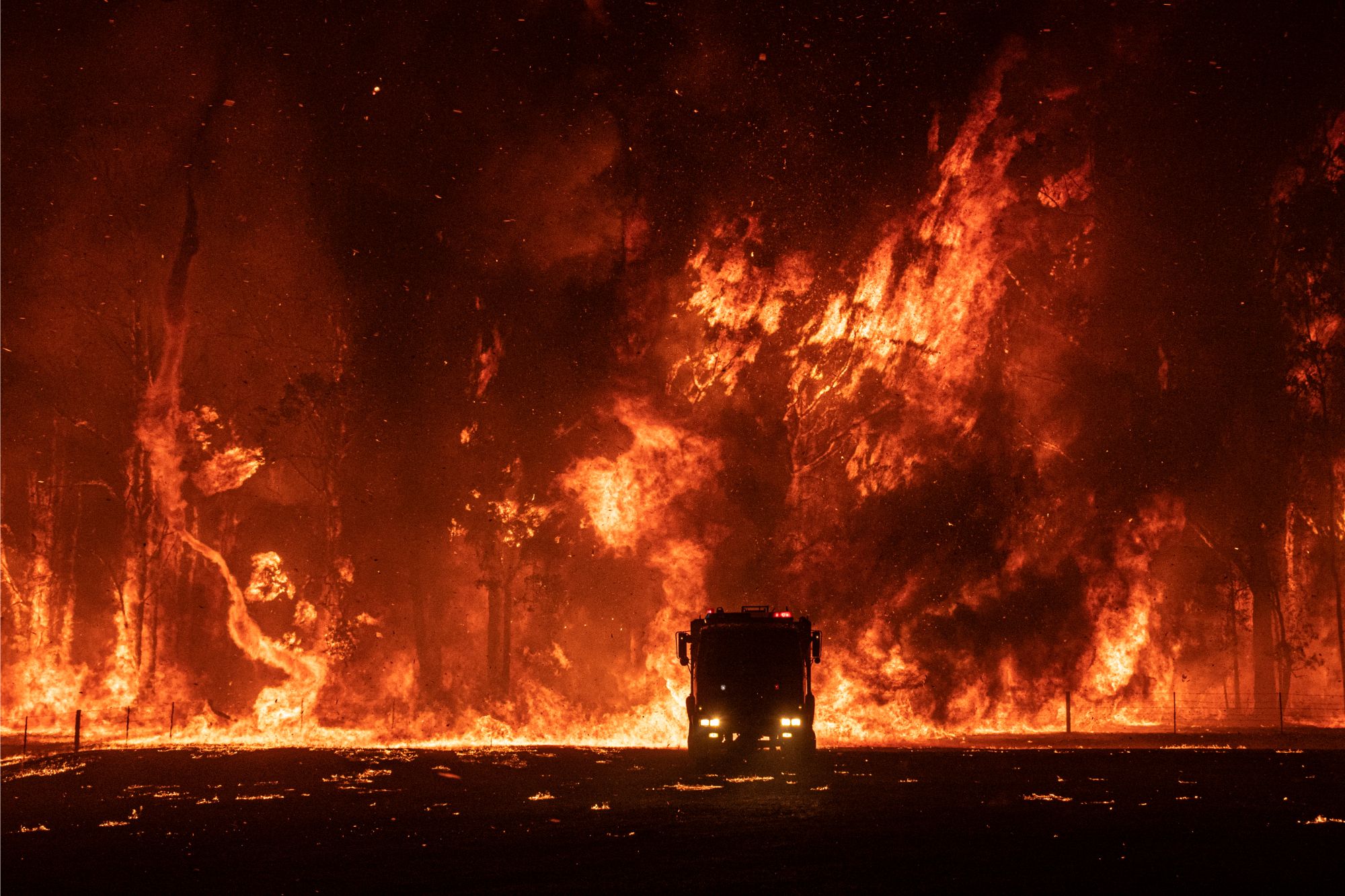 The violent, explosive anger of the Green Wattle Creek fire roars out of the forest. A Fire and Rescue truck briefly stands in front of the fire, which includes a fire tornado on the left. Orangeville, New South Wales. 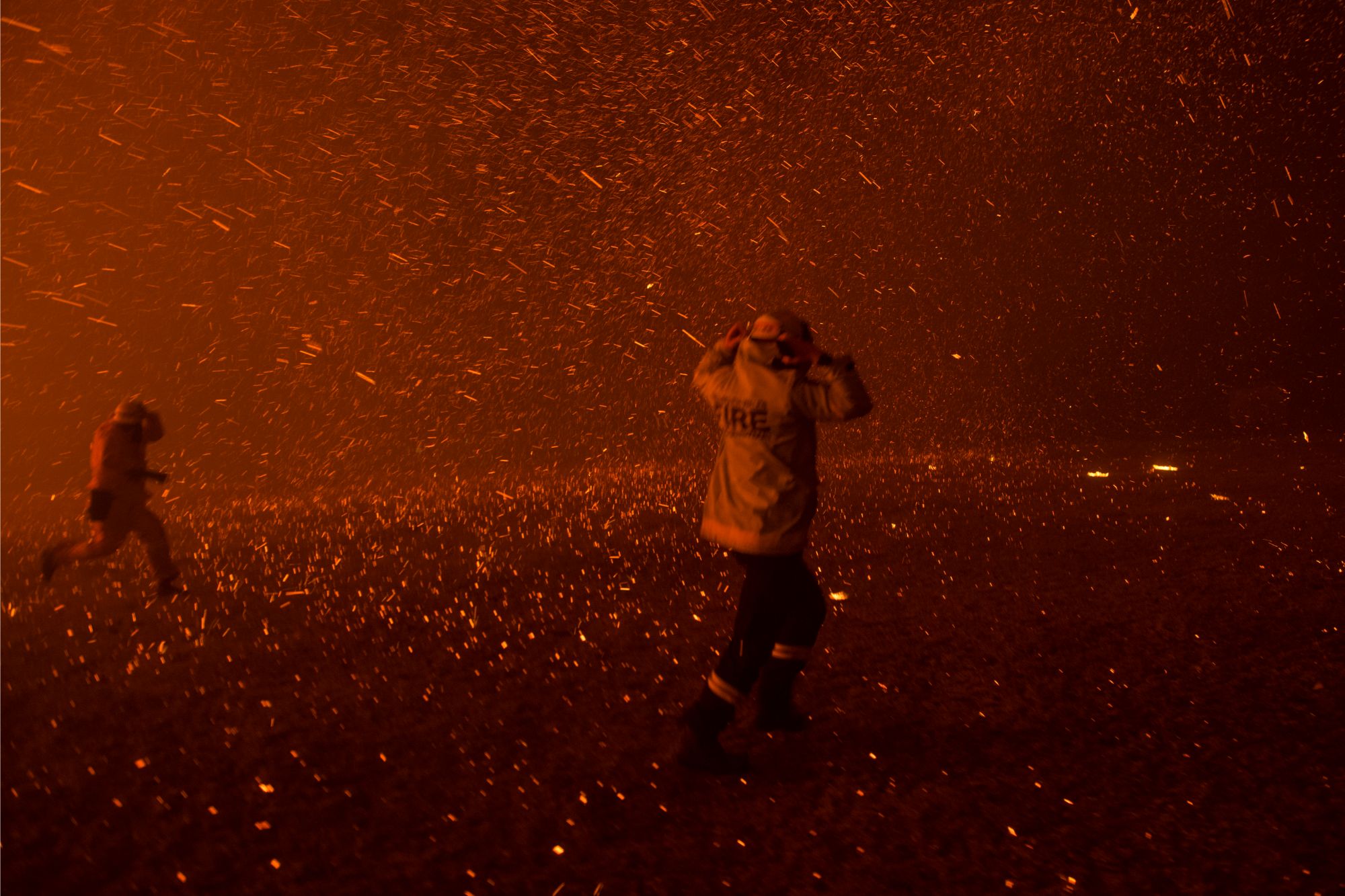 Firefighters from Menai Fire and Rescue run from intense heat amid air filled with embers as the Green Wattle Creek fire explodes out of the forest at Orangeville, New South Wales. 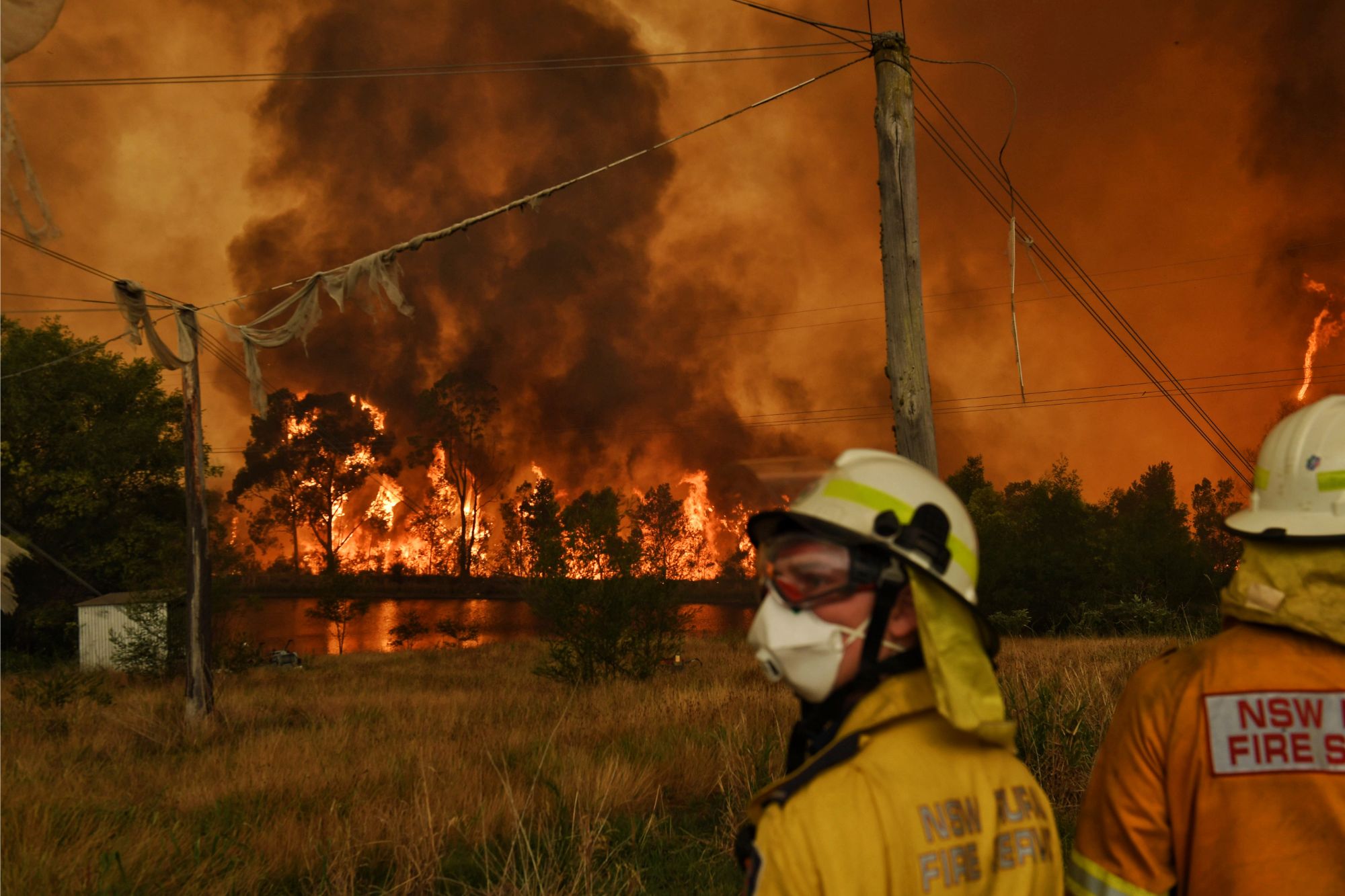 Rural Fire Service firefighters deployed to defend the “Fruit Bowl” in Bilpin watch as the Grose Valley fire moves up behind the property. 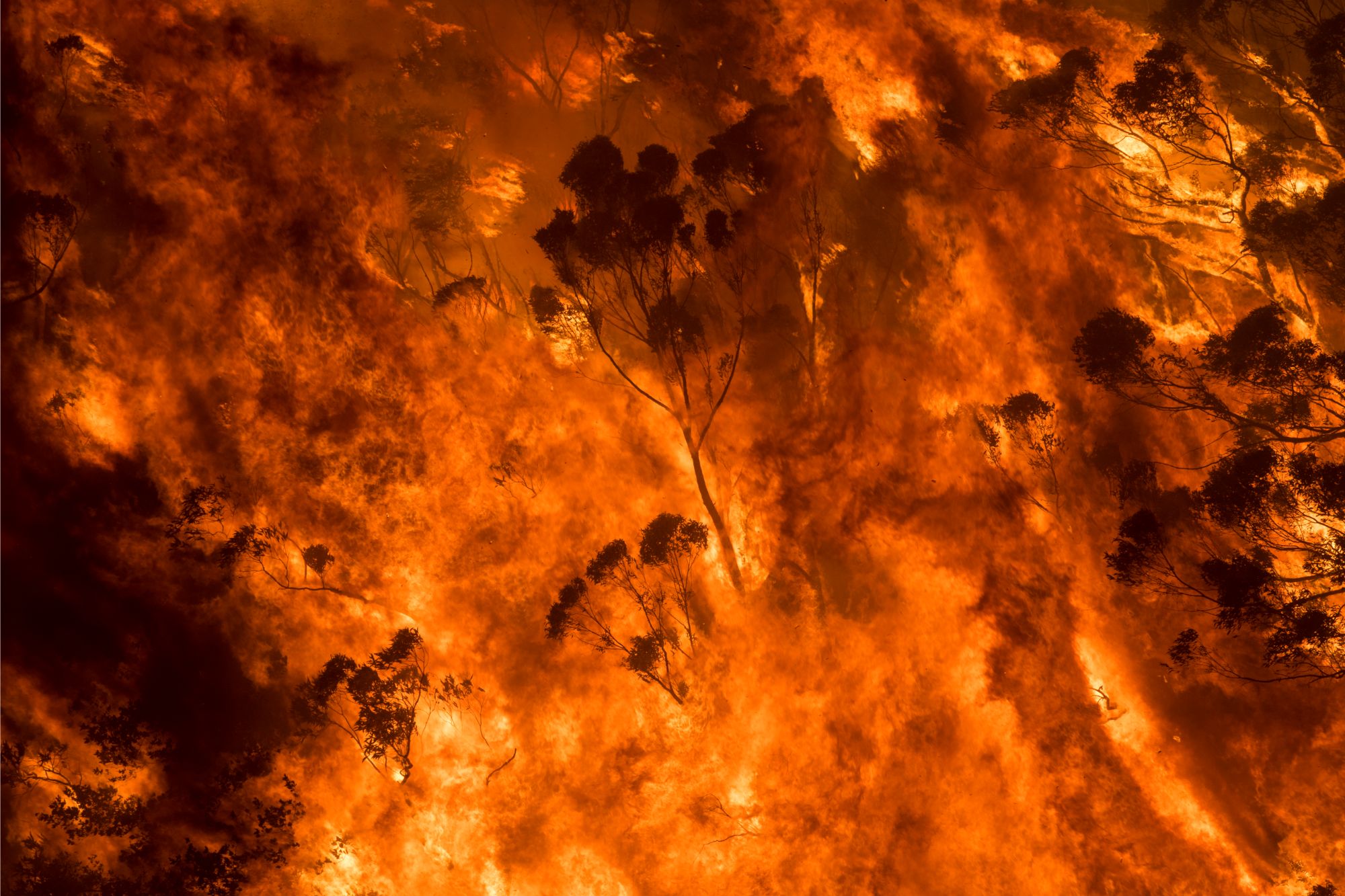 The Grose Valley fire let loose its raw fury as it tears into Bilpin a few days before Christmas. 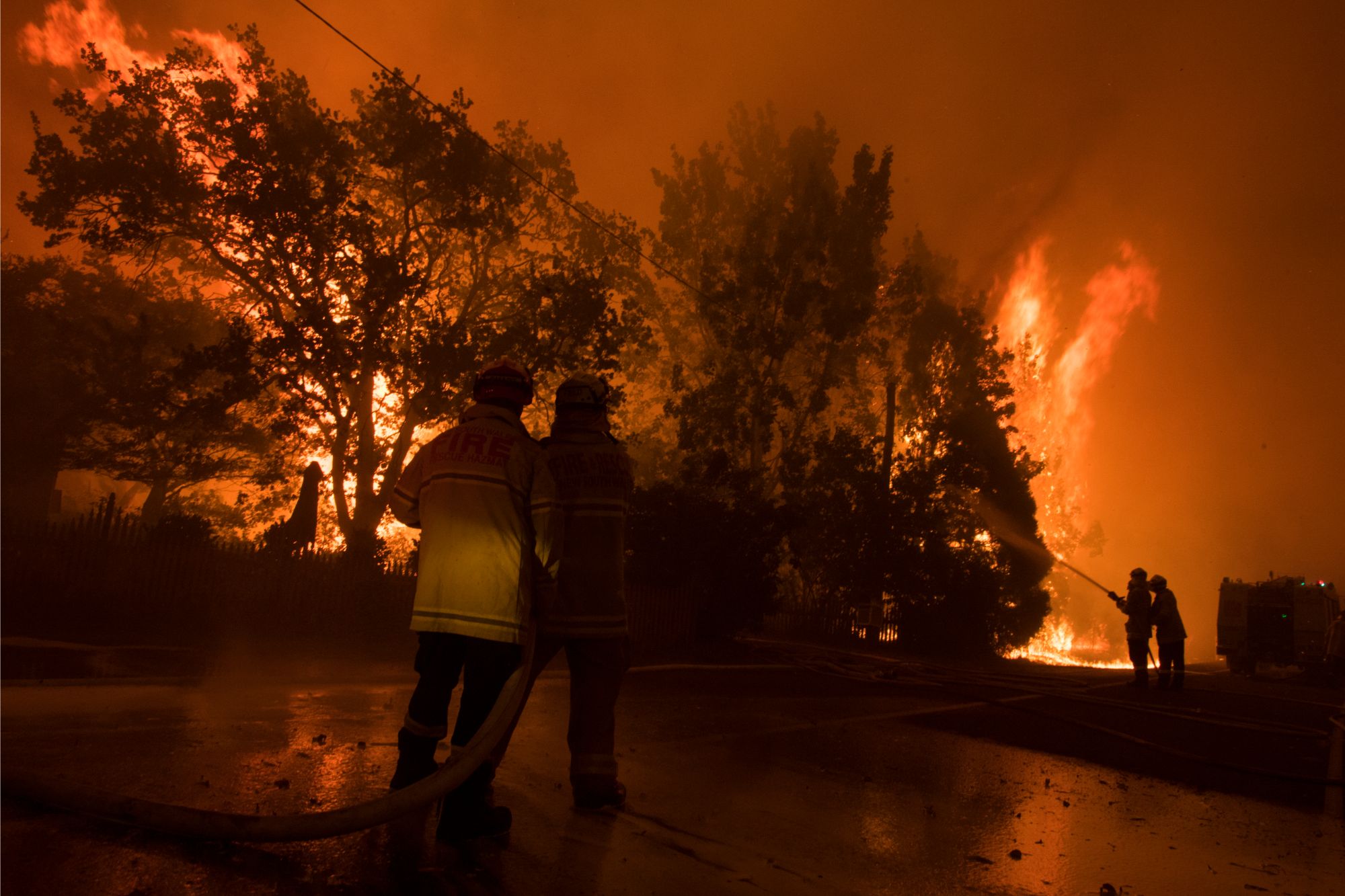 The world turns black hours before nightfall and firefighters retreat from defending homes to a final stand on the Bells Line of Road as the Grose Valley fire tears into Bilpin, Dargan, Clarence, Bell and Berambing. Many properties were lost, including the “Tutti Frutti” store, which these firefighters tried valiantly to save. 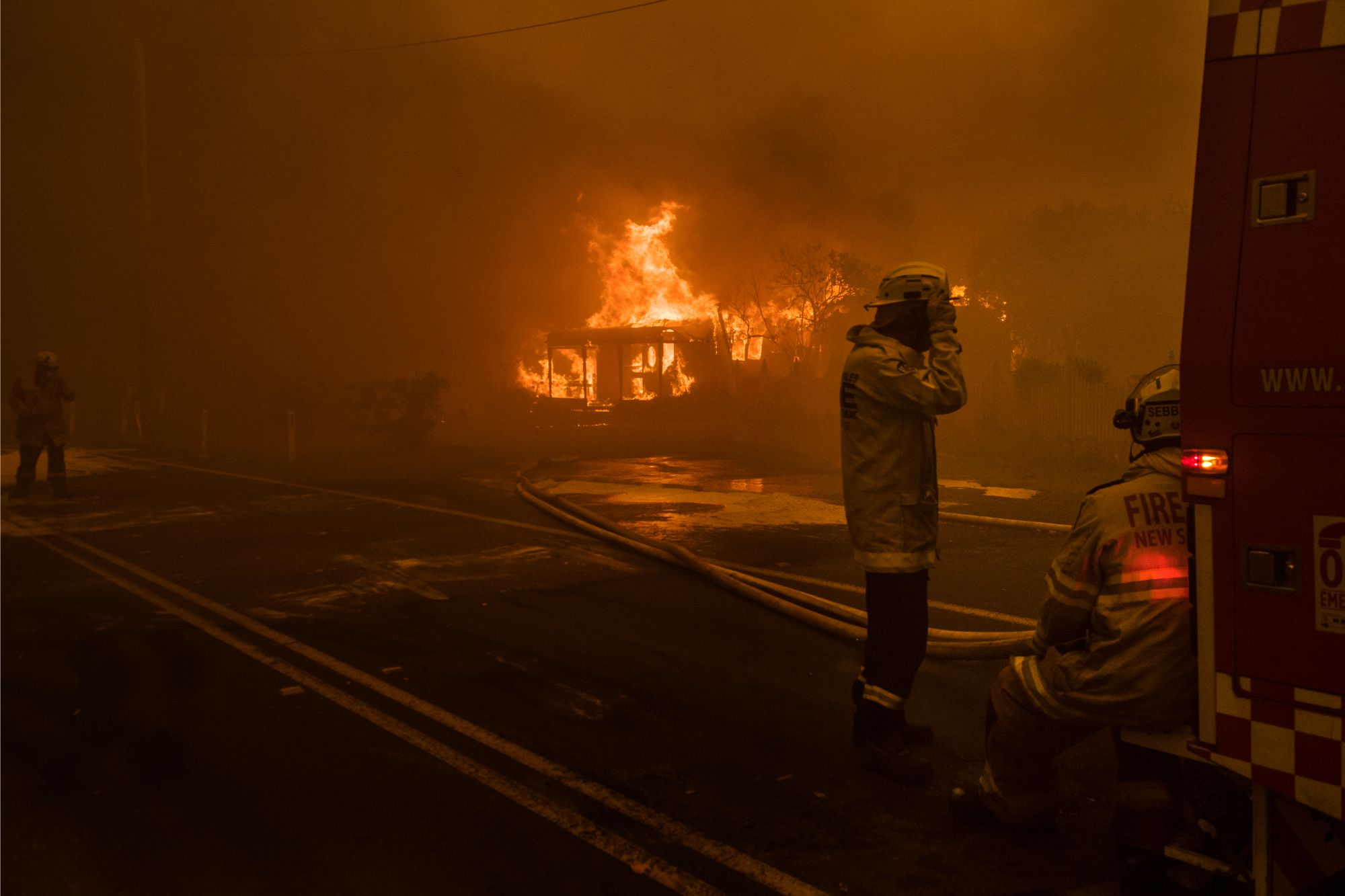 Firefighters rest after fire tore through their defences and destroyed numerous buildings all around them in Bilpin as the Grose Valley fire hit. 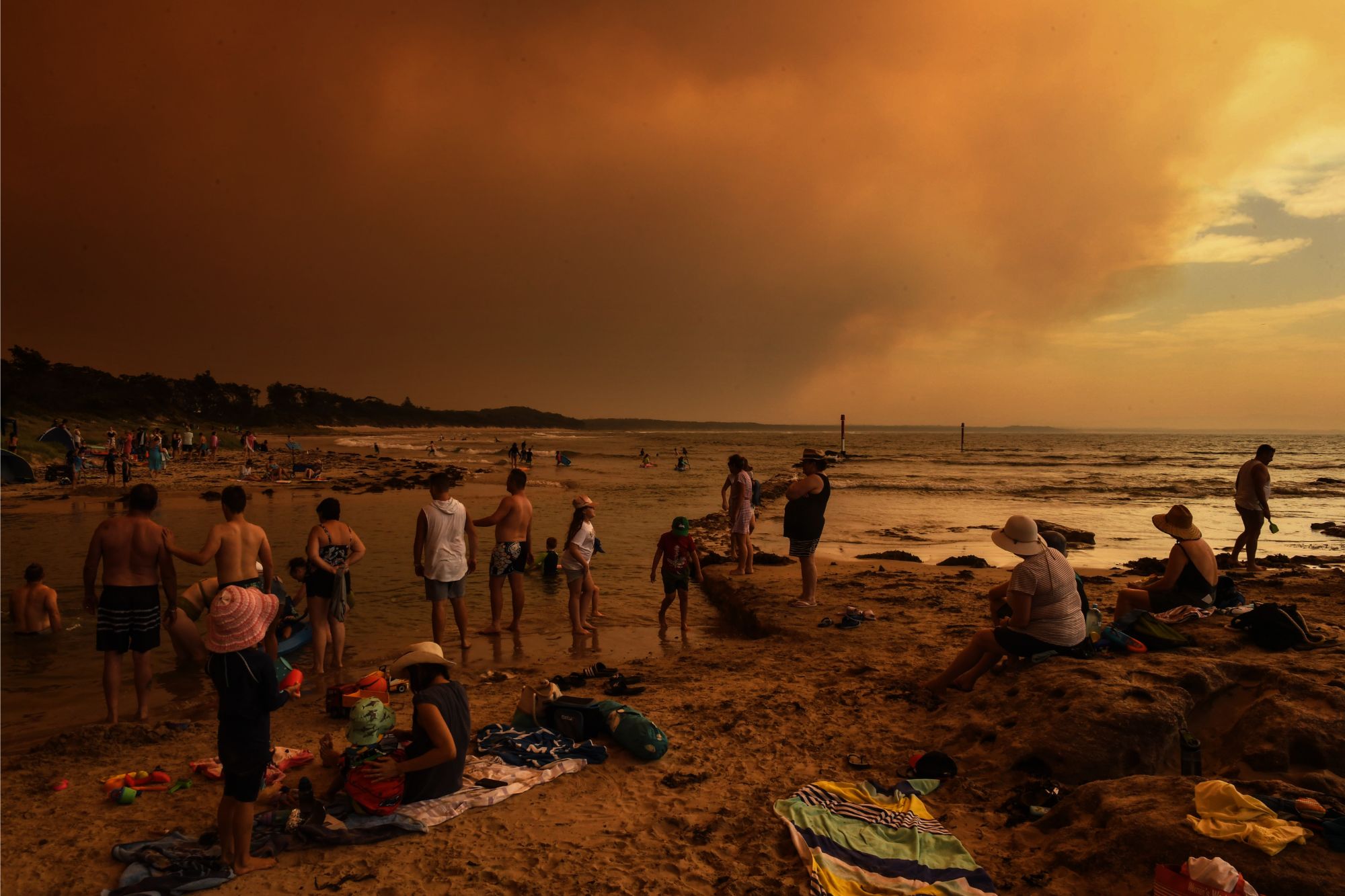 Holidaymakers and locals receive emergency messages that it is “too late to leave” and wait on Currarong Beach as the plumes of the mammoth Currowan blaze hide the sky. 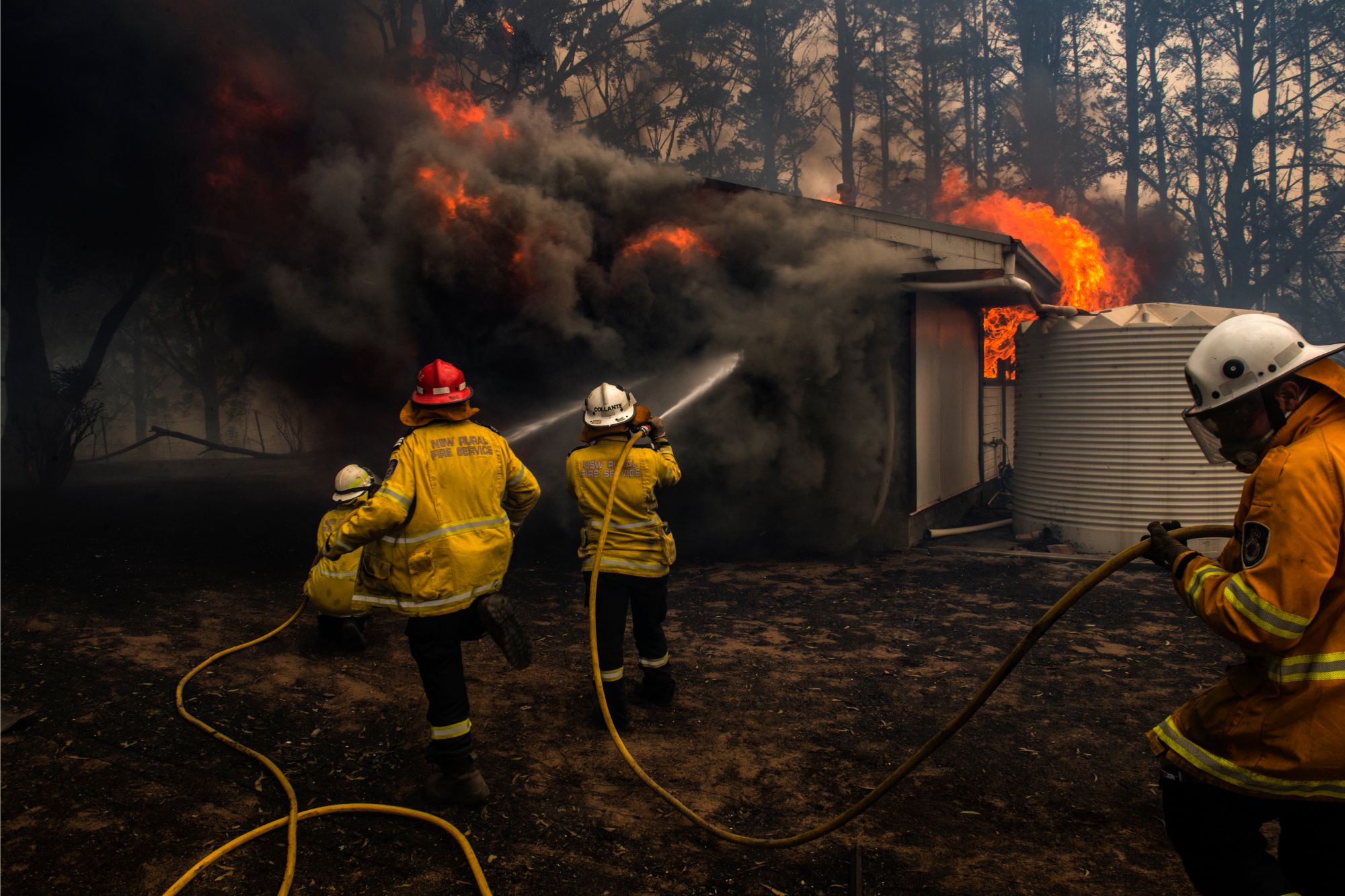 Rural Fire Service volunteers battle to cool a burning house to stop embers igniting unburned forest. The Morton fire, which began as the north-western edge of the Currowan fire, destroyed hundreds of homes as it burned over many weeks. 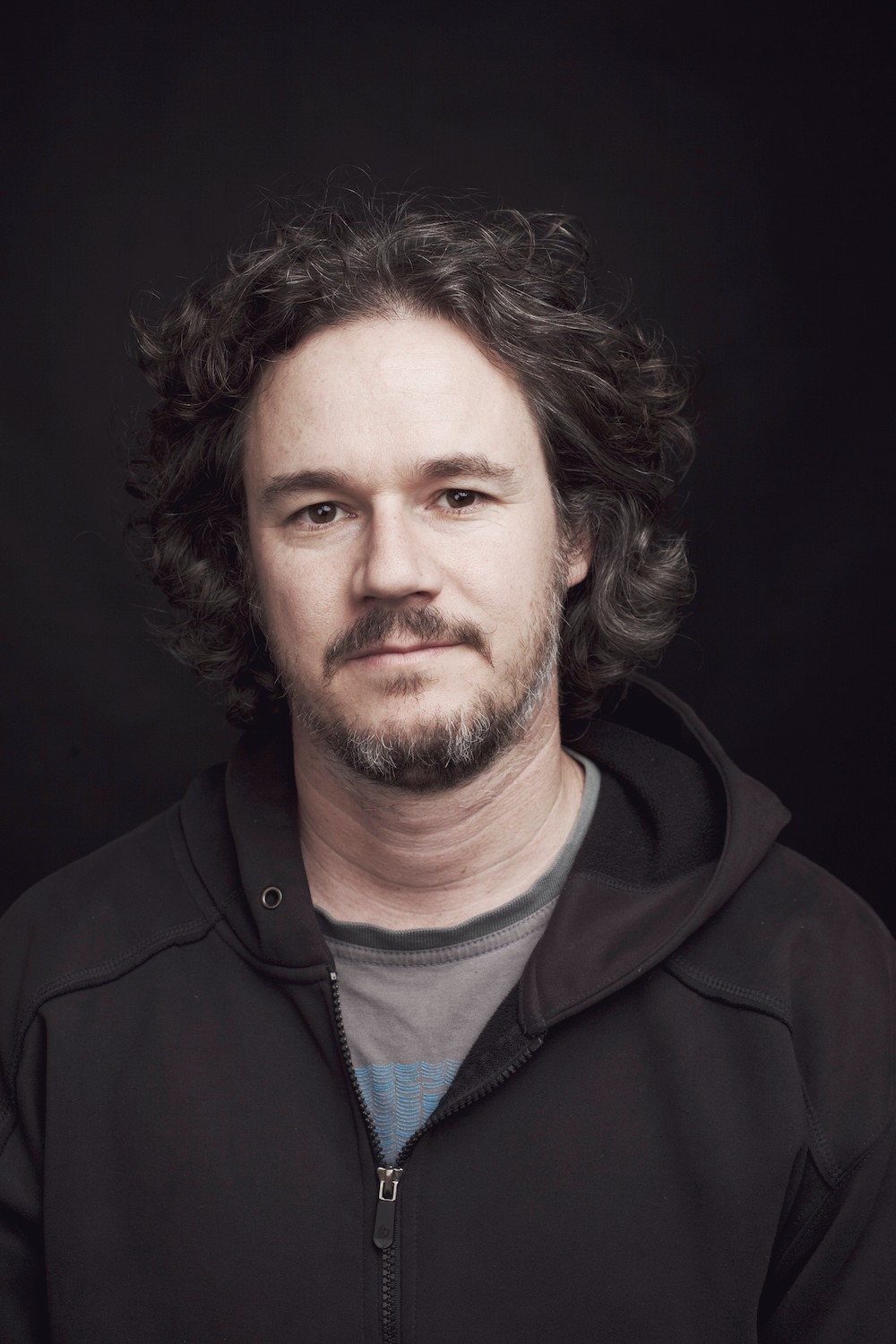 Nikon is a proud supporter of the Walkley Award for Photographic Essay and congratulates this year’s winner.