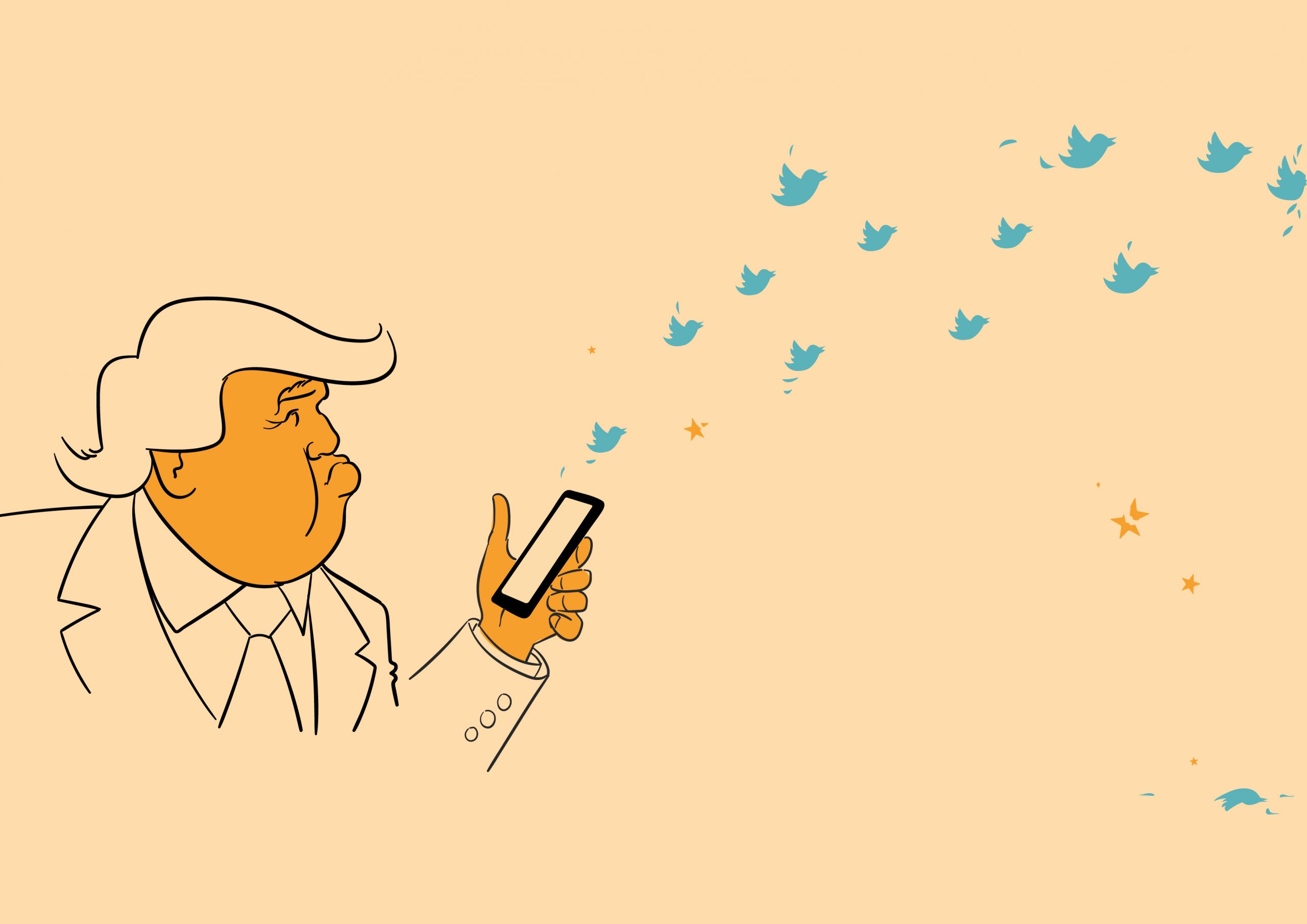 “There’s a great crisis of trust in journalism.”

Regional and local media outlets have been looking for new revenue sources to replace declining levels of print advertising for years. Not all have succeeded, and hundreds of Australian newsrooms have closed over the past decade. The global pandemic has accelerated the growth of so-called “news deserts”.

Fortunately, innovative start-up business models are stepping up to the plate. In an interview with the Walkley Foundation, *PS Media co-founder Simon Crerar explains how philanthropy is funding innovation in local journalism ahead of our webinar on the topic on Wednesday September 15.

Simon, you were the founding editor of BuzzFeed in Australia. What did that teach you about the way people consume news online?

In the five years I was at BuzzFeed, we focused a lot on interacting with our audience and building large audiences on social platforms. We built a really distinctively Australian version of BuzzFeed with relevant news, and amazing entertainment and lifestyle content. We also prioritised issues that we felt were undercovered by traditional media. So in particular we hired Indigenous affairs reporters, and put extensive resources into the LGBTQI beat, which was really well-timed with the same-sex marriage debate in the lead up to the plebiscite in 2015, this long running conversation into marriage equality in Australia.

It was a fantastic opportunity to see and understand what pieces of content really resonated with our audience, and using our owned and operated technology we analysed insights from the data to really deliver really relevant, effective content. So it was a really great journey.

When you were at BuzzFeed you were right at the centre of internet journalism. And you had Donald Trump as the US president and the rise of fake news. What did you learn about misinformation and how it spreads and what sort of lessons have you learned in terms of combating that?

What we’ve seen is a major decline in print advertising over the past few decades. Sadly, that’s meant a large reduction in the number of journalists and copy editors working for big titles. At the same time we’ve seen a huge growth in social platforms, and they don’t have editors.

There’s a great crisis of trust in journalism. That’s one of the things that has really motivated myself and my co-founders to launch *PS Media.

I think in Australia, the national media environment is in some ways a lot healthier than it was, when I was first here as a backpacker in 2003, because now as well as a number of new digital Australian outlets, there are a lot of international ones. The Guardian is set up very effectively here, as is the Daily Mail, the New York Times, and most recently the Washington Post.

Where there is a growing and concerning information deficit, is news at the local level. You talked about Donald Trump, and I think a reality is that over the last four or five years, often Australians knew more about what the man in the White House was tweeting about each day, then they knew about what was happening on their own street or block in their neighbourhood or town. Increasingly there’s no locally relevant news. That’s a tragedy, and a major issue.

We’ve obviously had some issues with regional newsroom funding. They’ve been struggling for a while since the advertising revenue has been drying up and this has been exacerbated by Covid. What sort of business models are emerging that are going to really help? At the international level we have The Guardian which is supported by a trust. But how does that translate to being able to support local or regional newsrooms?

The Guardian trust model is pretty unique globally, they had a big cash pile from their other titles, and of course a big bequest originally. But there is now a realisation that you can’t give great content out for free on the internet and expect that that will pay for your journalism.

I think at the local level what we’ve seen internationally is that in the USA more than two thousand newspapers closed over the last decade. Newspaper advertising revenue is 50% down in the UK. There are 47% fewer reporters working in Australia than there were in 2010. Prior to the pandemic, around 100 local papers closed in Australia and since the emergence of the coronavirus more than 200 have closed. It’s a crisis!

Where did you look to for inspiration before you started *PS Media?

We’ve looked at a whole range of models and exciting things happening internationally.

If you look at North America, where there is this big culture of philanthropy powering innovation, there’s tremendous original approaches where philanthropists are funding news startups. And in Europe there is a lot of government money supporting local journalism.

There have been some government funds to support journalism in Australia in recent years, and now excitingly there is the beginning of an emerging trend of philanthropists supporting local journalism. But Australia is definitely behind those other North American and European markets.

Because of some of all those local newsroom closures last year, there has been an explosion in the hyperlocal, really small-scale local publishing and that’s definitely encouraging.

But unfortunately what we’ve seen internationally is that those small digital outlets or newspapers are often fueled by a redundancy payment and eventually, typically, within about 18-months they run out of money and energy. And they don’t necessarily have the commercial smarts to develop sustainable revenue streams if they’ve been journalists.

So thinking really deeply about what is the long-term plan for sustainability is crucial. 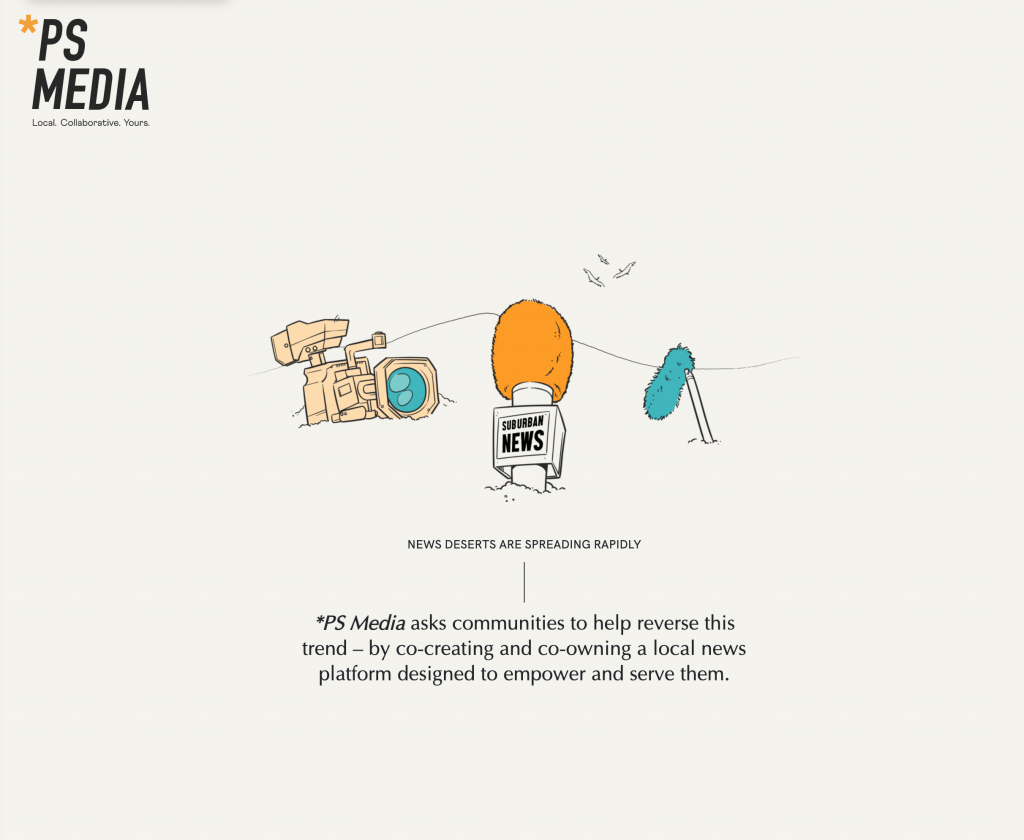 Okay. So in terms of *PS Media, can you sort of explain the rough concept to us and the business model? And also did you pick from other types of business models before you settled on the one where the consumers of the news are the ones that are contributing?

We looked at a lot of different approaches. After BuzzFeed, I thought really deeply about what is the most critical issue from a journalism perspective or information perspective and I felt that local news was really an area where in Australia we really needed innovation.

Our model is informed by a lot of analysis of successful overseas news start-ups but we have also taken into account Australia’s unique geography and socio-economic mix. Here there’s only 25 million people, mainly living in big cities, with extended urban fringes and smaller regional population centres. A big, diverse market.

*PS Media is a collaborative model for local news, designed to be co-created from the very beginning with the communities that we seek to serve. So effectively our value proposition is that we want to go deeper than membership or subscription and ask some of our future audience to come along on the journey with us to build this thing by becoming co-owners.

By being co-owners we believe they will have a much greater sense of agency and power in their  involvement with the media, because they are actually co-owners of it. Ultimately, our ambition is that when we are profitable our community co-owners will help determine what we do with that profit. We’re a social enterprise, profit-for-purpose business seeking to distribute those profits back into the community, with local co-owners determining where the dollars go.

How much will co-owners need to pay to buy a share?

$500, which they can pay over four years at $125 a share. Which is an investment ensuring that all our content is free to all. We’re going to invite all those who collaborate with *PS Media to share their own perspectives, and ultimately we believe that we are going to do a better job of deeply understanding community issues if we have a thousand sources or more in each location that we serve.

Our community collaborators are not going to do the reporting – we’re hiring professional journalists – but they are going to share their local expertise and thus help us to prioritise the journalistic issues to target, and as we create content and they read, watch or listen they’re going to provide a kind of instant feedback loop that will help us better understand and serve their needs.

Co-owners will have an equity share in the business. And that share will allow them to have a major say in the shape of the business and the distribution of the profits.

The value proposition is you’re paying to make news freely accessible to everyone versus potentially hitting a hard paywall after two or three stories locally and then having to pay $250 to $350 a year, so for the co-owners this will be cheaper than actually signing up for local news, if a masthead actually exists: we’re focusing on news deserts initially.

Our belief is that healthy, relevant local information should be easily accessible to everyone, so people can read, watch or listen to it for free.

Will you have revenue from other sources besides the co-owners? And do you see yourselves having an advertising platform at all?

We’re in the startup phase and at this stage we’re fundraising via equity investors and philanthropic supporters. We are collaborating with Sefa Partnerships (DGR 1) to enable catalytic philanthropic capital, with tax deductibility, to support the critical first stages of our work. Sefa Partnerships assisted the consortium who saved AAP from closure last year.

We’re not initially going to have display or programmatic ads. We’re going to have a small number of deep brand partnerships that will be integrated into our platform. So we’ve been speaking to some major Australian brands about being involved as founding brand partners.

So we’ll have co-ownership share subscription revenue, we’ll have brand partnership revenue, and then we’re going to develop a really compelling data product, which is in advanced development so I can’t say too much about it.

Can you tell me a bit more about who the other founders are and what they bring? 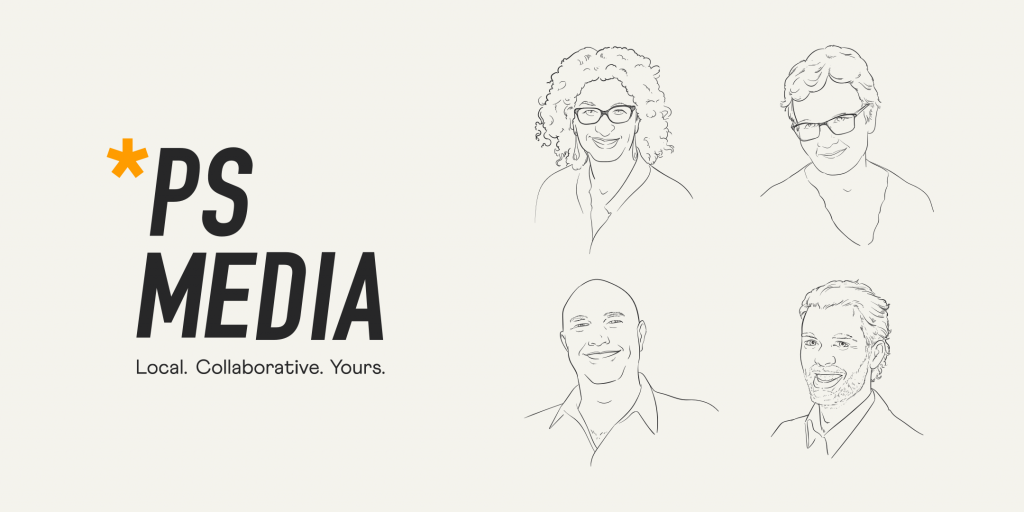 My co-founders are Karen Mahlab, who’s the founder and CEO of Pro Bono Australia, which is Australia’s leading news service for the social enterprise and philanthropic space. Margaret Simons who is a deeply experienced, Walkley winning journalist, author and academic. Meg was at The Age for a long time, and was the first media reporter for Crikey, and spent much of the past decade at the University of Melbourne’s Centre for Advancing Journalism.

And then the fourth member of our team is Robert Wise – our secret weapon! – who is the managing director of this amazing piece of community infrastructure called Be Collective. So we bring a really strong and diverse range of experiences as social change, technology and journalism leaders. We have been developing this for more than a year, and are really excited to be moving out of the hypothetical stage to begin co-creating this business with Australia.

*PS Media and the Walkley Foundation are hosting Why Philanthropy is Backing Local Journalism at 9am on Wednesday September 15. Register here. 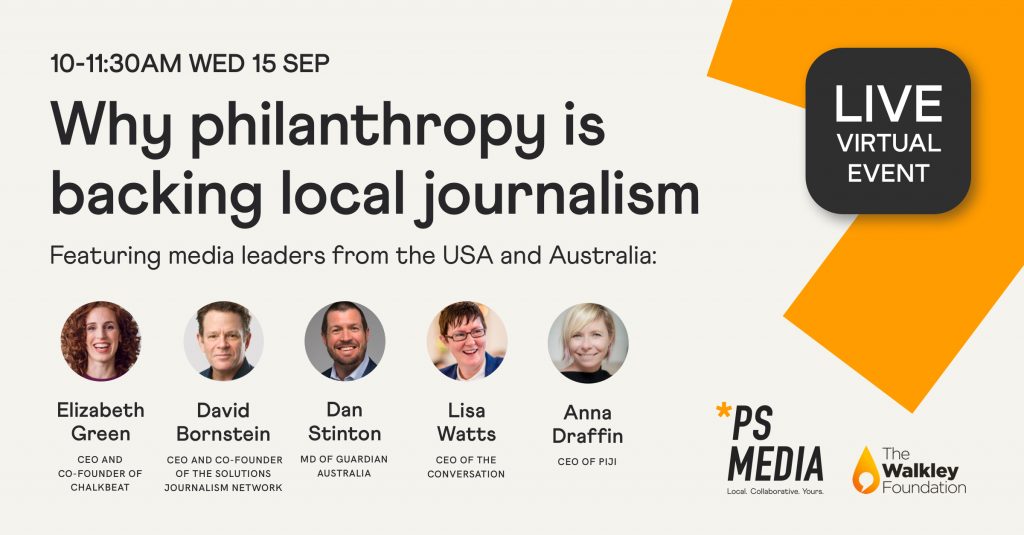