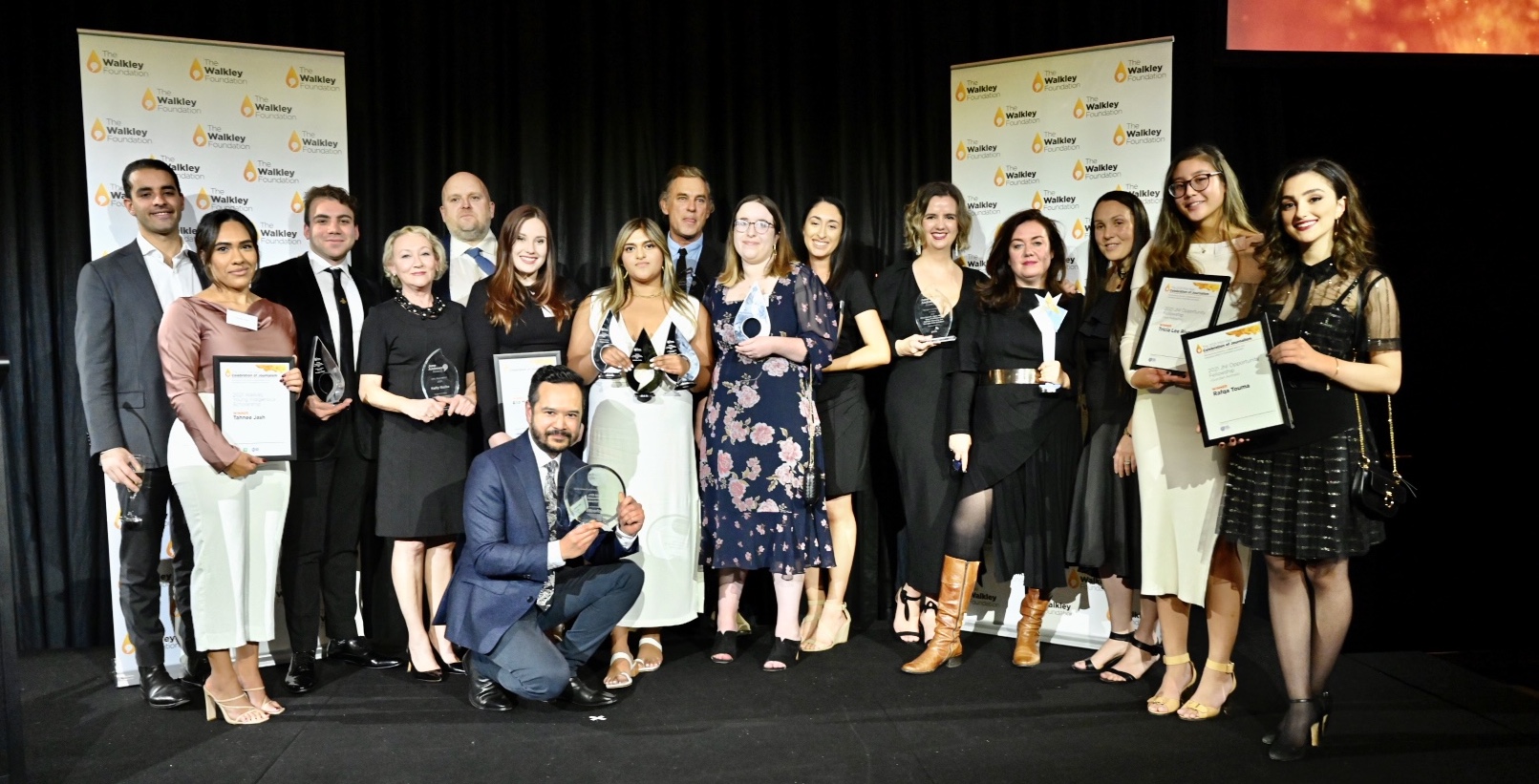 Winners unveiled for the 2021 Mid-Year Celebration of Journalism

Mridula Amin from the ABC was named the 2021 Walkley Young Australian Journalist of the Year, as the Walkley Foundation honoured all the winners in the 2021 Mid-Year Celebration of Journalism in Sydney this evening.

“Covid brought disruption and uncertainty to journalists and newsrooms just as it did to all Australians, and people around the world. But for all those challenges, the winners we celebrate tonight show how Australians can rely on our journalists for ethical, impactful reporting that informs, educates and serves,” Walkley Foundation Chief Executive Louisa Graham said.

“With common threads of exposing abuse of power, inequality and disadvantage, these winning stories reflect the defining issues that we’re facing as a nation.”

Mridula was named overall Young Australian Journalist of the Year for “The Hidden Park of Last Resort”. This story was also the winner of the Longform, feature or special category. The Walkley Judging Board, represented by Lenore Taylor, Claire Harvey, Michael Bachelard and Tory Shepherd found Amin’s entry stood out among a strong field.

“Sensitive, compassionate and beautifully shot, Mridula Amin’s ‘Hidden Park of Last Resort’ is a wonderful human story well told. Gaining the trust of the residents and demonstrating a non-judgemental approach to her reporting, Amin’s investigation empowered the community to fight for their homes inside one of Sydney’s last long-term caravan parks.”

Mridula was presented her award by John B. Fairfax, whose family’s Jibb Foundation has supported the Young Journalist of the Year Awards since 2017. Tonight the Walkley Foundation announced that the John B Fairfax family has pledged to support awards and professional development opportunities for young Australian journalists over the next 10 years with a $1million gift. Read more about this extraordinary gift here.

Finalists are selected by panels of peers on the basis of overall merit and journalistic excellence. The Walkley Foundation encourages a diversity of entries from journalists around Australia. Judges are selected by the Walkley Judging Board. The Walkley Foundation has a mechanism for dealing with any conflict of interest, actual or perceived, that may arise during the judging process. The guidelines are based on the principle that all actual conflicts of interest are to be avoided and that even a perceived conflict may be damaging to all parties.

The full list of winners is below. Read the Mid-Year Celebration of Journalism program here.

Young Australian Journalist of the Year
Supported by Jibb Foundation

Thanks to the support of the Jibb Foundation, Mridula receives a two-week trip to US newsrooms Buzzfeed, Columbia Journalism Review and Quartz (flights included). Each of the six category winners will be matched with a mentor to boost their career.

The winner of each of the six categories will receive a complimentary place in an AGSM @ UNSW Business School. The AGSM Client Engagement team will assist the winners to identify the course most relevant to their development. All courses earn credit towards the AGSM Certificate of Executive Management and Development which, in turn, carries course credit into the AGSM MBA and Graduate Certificates.

All media: Longform feature or special
Supported by The Sydney Morning Herald and The Age

All media: Coverage of community and regional affairs
Supported by Google News Initiative

Annabel Hennessy, The West Australian and The Sunday Times, “11-year-old Indigenous girl takes her own life after her alleged rapist is given bail” “Annaliesse Ugle: How housing insecurity and a lack of support contributed to 11-year-old girl’s despair” and “State Government proposes changes to bail laws to look after child sex victims after death of Annaliesse Ugle”

All media: ​Student journalist of the year
Supported by Twitter

Ben Schneiders, Royce Millar and Liam Mannix, The Age, “A city divided: COVID-19 finds a weakness in Melbourne’s social fault lines,” “All in this together? How rich and poor are travelling in lockdown” and “Starved out of Australia: The workers without money or food”

Administered by the Walkley Foundation

Supported by Media Diversity Australia, CoHealth and the National Ethnic and Multicultural Broadcasters’ Council and administered by the Walkley Foundation

Andrew Quilty, The Monthly and The Intercept, “A War on Civilians in Afghanistan”

Kelly Burke, Guardian Australia, “Neighbours actor allegedly removed from set after complaints of racism by Indigenous actor Shareena Clanton”, “Neighbours: more actors come forward with allegations of racist slurs and discrimination on set” and “If Neighbours racism allegations happened in US there would be ‘swift’ repercussions, Remy Hii says”

The Pascall Prize for Arts Criticism, managed by the Walkley Foundation

Supported by the Copyright Agency

Scout Wallen, The University of Queensland

Supported by: Judith Neilson Institute for Journalism and Ideas 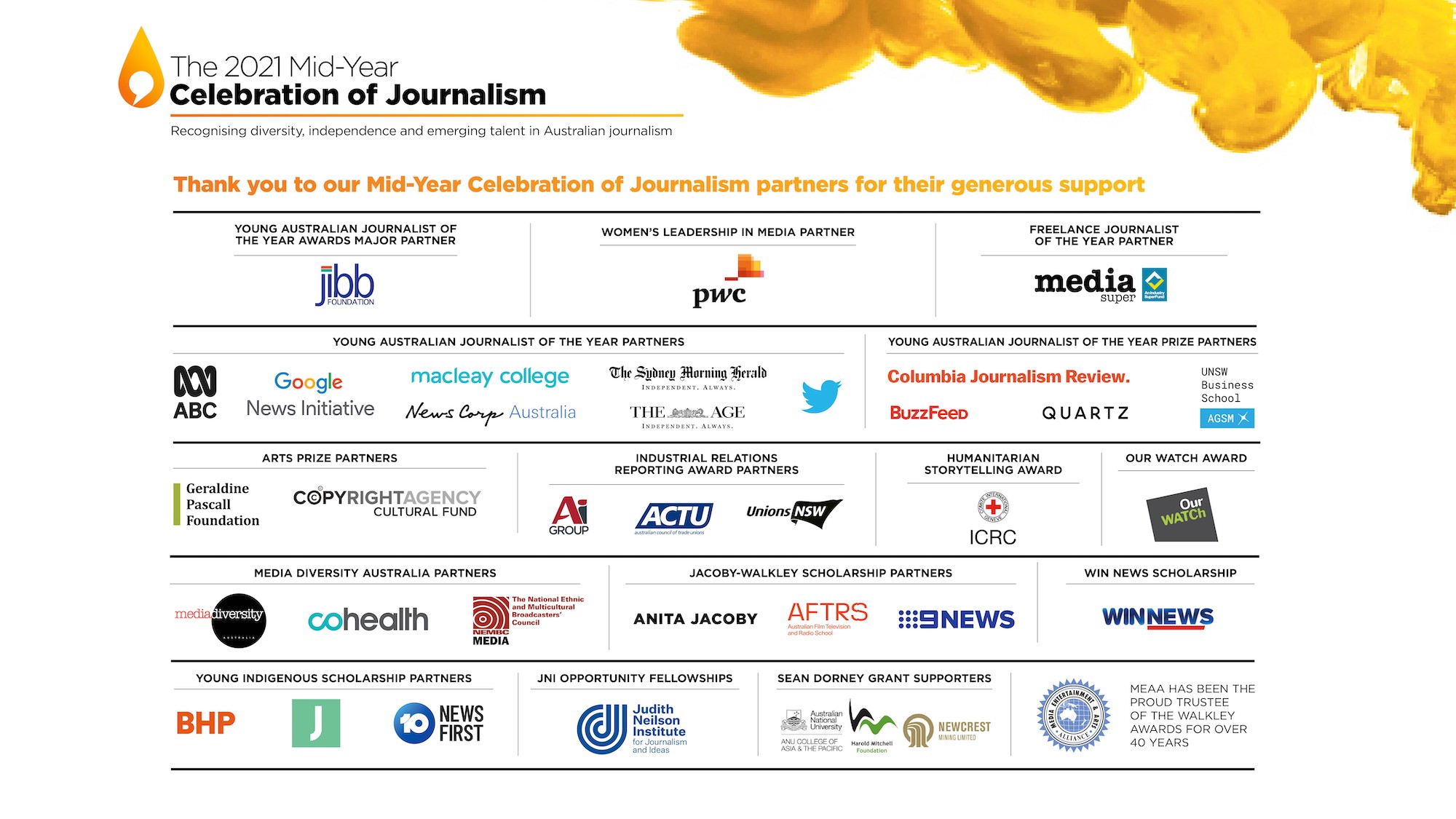