Reporting for 34 hours straight, most of the time within metres of the site of the siege, Chris Reason maintained a cool approach and a reliable stream of news-breaking moments from his position beside police snipers inside the Seven offices. While under potential threat and carrying the responsibility of exclusive access to the site, Reason was mindful of his ethical choices but never allowed his storytelling skills to falter.

Chris Reason is a senior reporter and presenter for Seven News. He has been with the network for 25 years, serving as both a foreign correspondent based in the London bureau (1992-96) and anchor to Seven’s flagship news programs – the 6pm bulletin, Sunrise, the afternoon and morning News. In a career that began in newspapers but quickly moved to television, he has covered some of the biggest stories of our time – across hotspots including Northern Ireland, Bosnia, the Middle East, Afghanistan and the Pacific rim. This is Reason’s first Walkley Award. 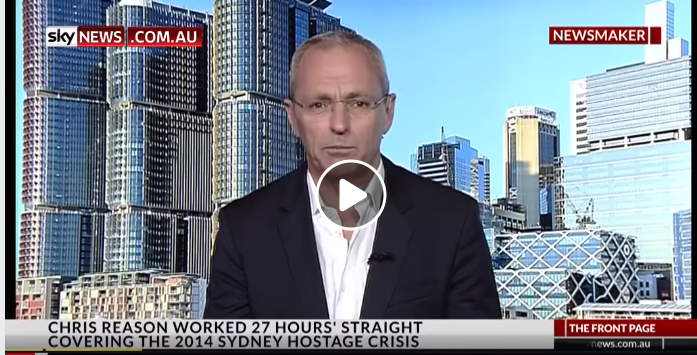 Chris Reason displayed enormous courage in reporting with cool precision from his own evacuated newsroom opposite Sydney’s Lindt Cafe over more than 24 hours during the gruelling and deadly siege. Working alongside police snipers, despite being warned of the danger of the gunman’s bullets and possible bombs, Reason used his exclusive access to break news while never sensationalising his coverage.