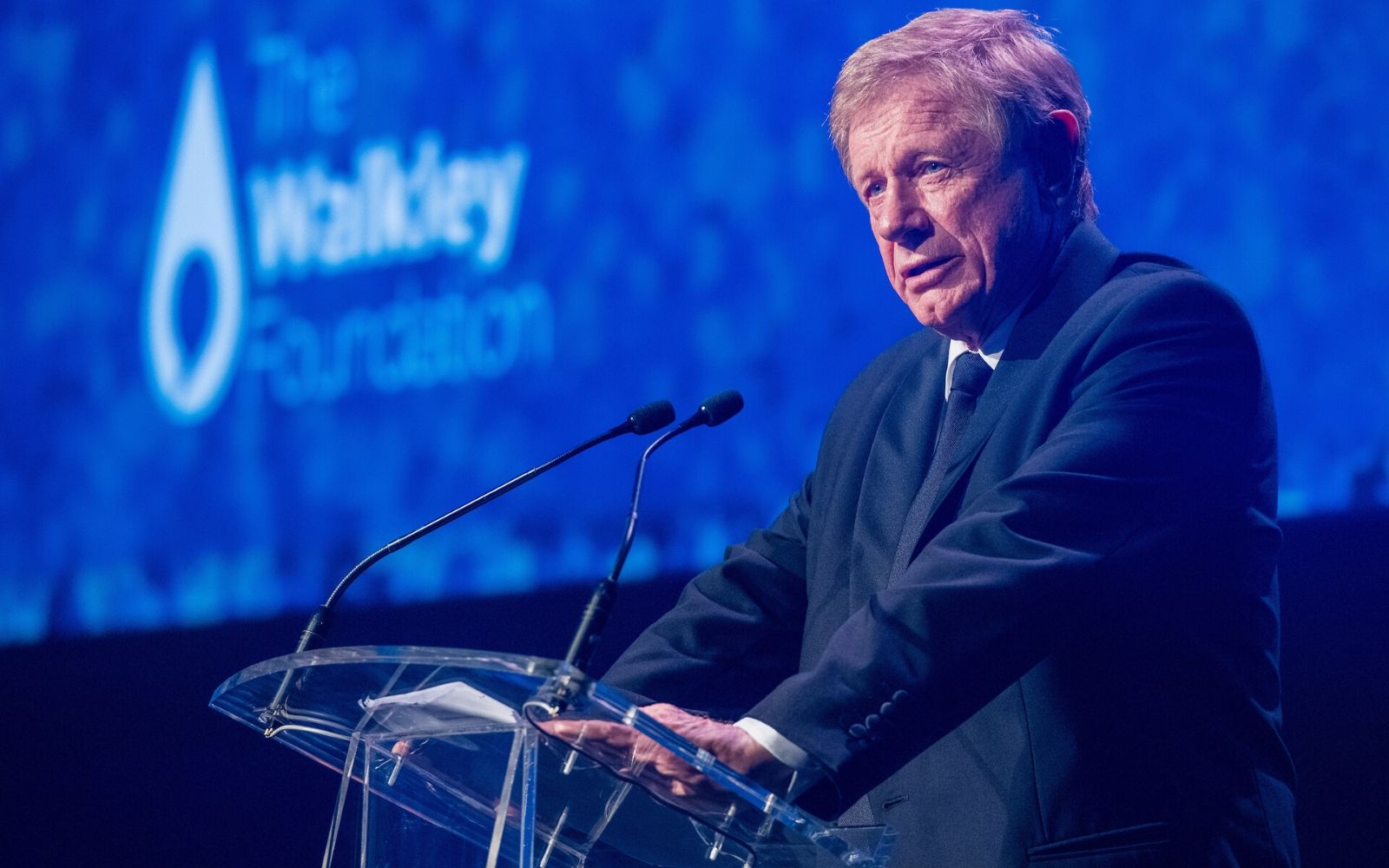 Walkley Foundation chair Kerry O’Brien spoke frankly about the risks facing Australian journalism: “Freedom is usually eroded gradually… Its loss is not necessarily felt  day by day, but we will certainly know when it’s gone.”

This year, for a brief moment in the history of Australian journalism, every significant news organisation in this country put its competitive instincts and its differences to one side and united as one voice to stand against an unacceptable step down the road to authoritarianism.

Authoritarianism unchecked can lead to fascism. Fortunately in this country we’re a long way from that yet, but a study of history amply demonstrates how fascism begins. Freedom is usually eroded gradually. It might happen over years, even decades. Its loss is not necessarily felt  day by day, but we will certainly know when it’s gone.

So far the Morrison government has resisted the industry’s appeal for fundamental protections of a free and robust press to be enshrined in legislation at the very least—not placing journalists above the law—but enshrining in a practical and meaningful way their special place as a crucial pillar of democracy.

Perhaps the government is intending to wait us out, waiting for the issue to go away in the hope that most people in this country are so consumed by bread and butter issues, so consumed by their own lives and personal struggles and challenges, that they won’t care enough when the chips are down to support something as abstract as the spirit of democracy or the spirit of freedom—because you can’t cash in the spirit of something at the bank, as you might a tax cut.

That is why we have to remain resolved to keep this campaign going, and not let it go, even after a few months, because those of us who have witnessed and experienced and reported on repression in other countries, some of them not too far from our own shores, understand the solid reality of democracy as well as the strength or weakness of its spirit. Some of our colleagues have paid the ultimate price for exposing abuses of democracy, and lost their lives.

I would add to that: countries that don’t respect and promote their citizens’ rights at home are living in glass houses and have diminished their right to be taken seriously when they try to preach to neighbours from a high moral ground they have surrendered.

This also comes at a time when the spirit of freedom of information laws if not the letter, is being abused and there are more allegations of corruption being investigated officially than ever before.

There’s another inconsistency that needs to be called out. This Government is fond of saying, as it did in seeking to distance itself from the decisions by Australian Federal Police to raid the ABC and the home of News Corp journalist, Annika Smethurst, that it can’t interfere in police operational matters. Yet, in seeking to assuage the concerns of media companies and journalists after the raids, the Attorney-General, Christian Porter, promised that he would actually be prepared to become involved in the process to the extent of insisting on the Director of Public Prosecutions getting his personal consent before seeking to prosecute a journalist.

Sorry Mr Porter, that is not reassuring. The judgements you might bring to bear will not be independent of the government’s own self-interest, and we all know that self-interest of any stripe, political or otherwise, can be a powerful deterrent from doing the right thing. That is not understanding the spirit or the concept of free speech, nor materially guaranteeing free speech or a free press.

But we have to practice what we preach. Our work across the breadth of all media and all communities should speak for our integrity—from the smallest story to the biggest. Individually and collectively. And if it doesn’t that should make us uncomfortable, in the very least. Because if we are going to stand on our dignity and defend press freedom as a fundamental pillar of democracy, then we have to be sure that our actions are defensible, that we practice what we preach, that we do what we say we do. And at the heart of the Walkley Foundation’s work is the protection and promotion of integrity in journalism.

There is one other issue I want to acknowledge tonight. In 2011 Walkley judges awarded a Walkley to Wikileaks with Julian Assange as its editor, for its outstanding contribution to journalism. The judgement was not lightly made that Julian Assange was acting as a journalist, applying new technology to “penetrate the inner workings of government to reveal an avalanche of inconvenient truths in a global publishing coup”. Those inconvenient truths were published far and wide in the mainstream media. As we sit here tonight, Julian Assange is mouldering in a British prison awaiting extradition to the United States where he may pay for their severe embarrassment with a life in prison. Again, this government could demonstrate its commitment to a free press by using its significant influence with its closest ally to gain his return to Australia.

Another challenge our industry faces is the trend towards the polarisation of our craft—the attempts by some to paint us as either of the left or of the right—has to be resisted, because I firmly believe that for the vast bulk of us, that is not how we practice our trade. We do not arrive in the nurseries of journalism as budding ideologues of left or right, nor do the vast bulk of us become that way as we develop.

I absolutely reject the Roger Ailes view of the world, that if you’re not on the right then you must be on the left.

For journalists to call out the powerful of any political colour for their abuses of power is not about ideology. It is simply journalists doing their job, practicing their craft.

Adele Ferguson was not reflecting some personal ideological hatred of capitalism when she called out corrupt behaviour within our banking and financial sector, forcing a royal commission on a reluctant government. And nor were the whistleblowers who helped her, being ideological. They saw a wrong and followed their conscience with great courage to reveal it, paying a heavy personal price in the process.

There was nothing ideological about Chris Masters’ determination to bring into the light of day, serious and deeply disturbing allegations of war crimes by elite Australian military forces in Afghanistan, first in his book, and then with Nick McKenzie in further sustained investigative reporting. It was strong, compelling journalism of integrity.

When Hedley Thomas gripped the world with his Teacher’s Pet podcast, forced the re-opening of the Lynette Dawson case, leading to the arrest of her husband, was he driven by ideology? Of course not.

Or when Anne Connolly forced another royal commission, into aged care with her exposes of the sickening abuses within that industry?

Joanne McCarthy wasn’t under instruction from some secret socialist cell or driven by a hatred of Christianity when she exposed the pattern of endemic sexual abuse and attempted cover-ups perpetrated from within the Catholic Church in the Hunter region.

Kate McClymont wasn’t acting as a servant of either the conservative right or the Labor left when she doggedly and courageously exposed the entrenched corrupt practices of Eddie Obeid.

The Walkley Foundation grew from the creation of the awards themselves more than 60 years ago. And like the awards, the foundation is here to promote and help safeguard the integrity of quality journalism in all its forms, without fear or favour. And the judges of these awards, drawn from all corners of our craft and across the spectrum of our industry, deliver that same integrity in their judging. It couldn’t be otherwise, or these 60 years of awards could not have been sustained, and would have long since collapsed.

It has been a great privilege to chair the Foundation this year and see close up the super efforts of Louisa Graham and her small but dedicated team delivering the important and expanding Walkley program of grants, scholarships and mentorship, as the industry struggles. I would also like to acknowledge the voluntary efforts of my fellow directors, Marcus Strom, Marina Go, Karen Percy, Lenore Taylor and Michael Janda, all of whom give up significant time in busy lives to guide the foundation in its work.

This is a time of serious challenge for our craft across a broad front, at a time when democratic societies like ours are losing their trust in institutions pretty much across the board. The integrity reflected in the work we’re about to celebrate tonight is our bulwark against that erosion of trust and a reminder not only to the citizens of this country, but importantly to ourselves, of what we’re capable of, and of what we aspire to be. Thank you.

This is an edited version of the speech Kerry O’Brien gave at the 64th Walkley Awards for Excellence in Journalism in Sydney on November 28, 2019. Kerry served as chair of the Walkley Foundation in 2019.

See all the winners of the 2019 Walkley Awards here.